Volkwagen has introduced the first 'GTI' badged version of the Golf cabriolet since 1993. It certainly looks good, but does it drive well enough to justify its badge? 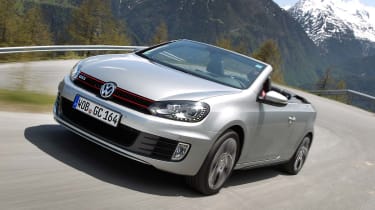 The clue is in the name for this one - it's a cabriolet version of the Volkswagen Golf GTI. Or, more precisely, it's a Golf Cabriolet wearing a GTI badge. The distinction is subtle, but important. Deliveries to customers start in July 2012, with the GTI cab set to wear a pricetag in the UK of £29,310 with a manual gearbox and a wince-inducing £30,610 for the DSG.

It's the first Golf cabriolet to get a GTI badge in the UK since the mk1 version finally went off sale in 1993.

As with the standard Golf Cabriolet the GTI gets a reinforced body structure that's claimed to make it one of the most rigid soft-tops in the entire VW group. The engine is the familiar 208bhp 'TSI' 2-litre turbocharged four-cylinder that powers the existing GTI. European buyers have already been able to get this engine in the cabrio, without GTI badging, but it's been denied to UK customers until now.

The GTI gets firmed-up and lowered suspension, sitting 22mm closer to the ground than the standard cabrio, with UK buyers also getting standard 18-inch 'Shadow Monza' alloy wheels. As with the GTI hatchback, there's also Volkswagen's 'XDS' traction control system, which mimics a locking differential by braking a spinning wheel.

There’s the same chassis reinforcement as the standard cabrio, adding a fair amount of mass to the equation. The porky 1533kg unladen weight is 140kg more than that of the three-door GTI hatchback, and the 7.3-sec 0-62mph time is 0.4-sec slower.

Like a slightly quicker Golf cabriolet. It certainly feels impressively rigid, at least on the generally smooth German tarmac we tested the car on, with none of the sort of structural wobbling that used to afflict mid-sized cabriolets. In this regard it feels better than the occasionally flexible Volkswagen Eos, it’s retractable hard-topped half-sister.

Traction is good, and the clever pretend locking diff can be felt doing its thing to help maximise available and fight understeer, while the firmer springing hasn’t come at the expense of body control. The six-speed manual gearbox shifts as slickly as ever, and the solid brake pedal acts as a decent fulcrum for heel-and-toe work.

All good then? Not quite. While the car delivers well on the cabriolet part of the equation, it doesn’t quite manage on the ‘GTI’ bit. The extra mass has really blunted performance, by more than the raw 0-62mph time suggests, and result is a car that struggles to deliver the motivation you’d expect from something carrying this iconic badge. The chassis is a fair bit softer than the hatchback GTI as well. After a couple of hours you’re left wondering quite what, other than the bodykit and bling, those three little letters on the bootlid are bringing you over the standard car.

That depends on how important the GTI badge really is to you. The identically-engined Eos isn’t as sharp a steer, and is obviously a far older car, but it’s also £1600 cheaper – and its retractable hard-top still has a strong appeal to those looking for a psuedo-coupe. Perhaps more to the point, the 158bhp 1.4-litre TSI cabriolet is nearly five grand less.

It’s certainly a very easy car to live with. The powered roof motors up and down quietly and quickly, and refinement with the roof in place is generally good – although our test car suffered from some wind-whistle from the top of its doors. As with the standard cabrio you get near-adult sized rear seats and – despite the need to make space for the folded hood - a decent sized boot.

The ‘Jacara’ tartan trim on the seats looks brilliant – well worth avoiding the leather option for.