Updated Golf is cheaper despite significant technical changes for 2017 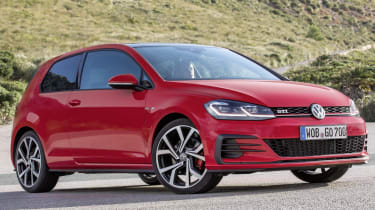 Volkswagen has revealed its comprehensive package of updates for the Mk7 Volkswagen Golf, with new and updated engines, a new gearbox, refreshed styling and an overhaul of the model’s infotainment systems.

Prices for the new Golf have also changed, but despite improved equipment the range is, on average, £650 cheaper than it was previously.

The most basic Golf – the three-cylinder 1-litre powered three-door hatch – costs the same as before at £17,625. Even so, the entry-level model still gets the same upgrades as the rest of the range including LED taillights and a 6-inch touchscreen.

The price of the most powerful Golf, the R, also doesn’t change and neither does its 308bhp power output. However, there are changes to the two other performance Golfs, the GTI and GTD. The diesel hot hatch goes up from £26,955 to £28,4880.

Changes to the GTI result in an increase in performance – bringing it a little closer to the rapid GTI Clubsport models and Golf R, without stepping on their toes. Power from the familiar EA888 2-litre four-cylinder turbocharged engine rises to 227bhp from the existing 217bhp – equalling the output of the old Performance model – while the new Golf GTI Performance rises to 241bhp. For comparison, the current Clubsport develops 286bhp and the Clubsport S hits 306bhp. Despite the increase in power, the price for a basic GTI drops from £28,515 to £27,865.

A new seven-speed dual-clutch transmission will be rolled out across the range, replacing the previous six-speed DSG, and this should also be available in the GTI.

Other changes to the sporty Golf are styling related. The distinguishing red line through the grille is now more pronounced, replicated alongside the LED daytime running lights inside the new full-LED headlights (those LED lights now replace the outgoing Xenon lights on certain models in the Golf range). There’s a new rear bumper too (with full LED tail lights, standard across the range) and larger tailpipes.

Similar visual tweaks can be found on the GTE, the sporty plug-in hybrid in the Golf range. Here though the red stripe is blue, as it was on the previous GTE, and the model once again gets C-shaped LED daytime running lights lower in the bumper.

The biggest alteration across the Golf range is a new “1.5 TSI Evo” engine, replacing the old 1.4 TSI. In standard specification it develops 148bhp and 184lb ft of torque from 1500rpm, but a more frugal BlueMotion version will also be available with slightly lower outputs of 129bhp and 148lb ft (from 1400rpm).

The latter is projected to cover 61.4 miles on each gallon of fuel (with 104g/km of CO2) but both 1.5s will be economical as well as respectably powerful – all are direct-injected, use Active Cylinder Management to shut down a pair of cylinders on light loads, and variable geometry turbocharging as part of a pseudo-Miller cycle combustion process.

The BlueMotion unit can also shut down the engine entirely off the throttle as part of a coasting function – retaining full use of the electrically-assisted steering and brake servo.

Interestingly, no mention is made of the Golf’s diesel power units. While the new Golf is sure to include the 1.6 and 2-litre units currently available, the focus at VW now is clearly on petrol and plug-in power. With regards to the latter, the next Golf is also expected to get a full-electric variant, as hinted at in Paris, with a more powerful 134bhp electric motor than the current e-Golf, and a range increase from 118 miles to around 186 miles.

Inside, the Golf’s cabin also comes under the surgeon’s knife, though the changes are more technical than visual – the Golf’s interior architecture is much the same as the current model. 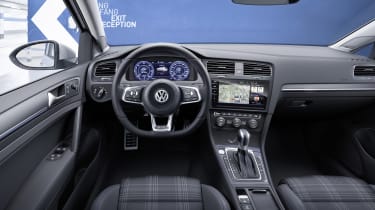 Golfs will get their own interpretations of Audi’s “virtual cockpit”, with a fully digital, 12.3-inch instrument display ahead of the driver. This display (Active Info Display, in VW parlance) can show navigation data, consumption and range information, efficiency profiles, performance and driver assistance info, or a classic two-dial setup.

In the Navigation setting, the dials move aside (as they do in the Audi virtual cockpit) for a large map display in either 2D or 3D. GTIs get their own red contrasting colour for the dials, while GTE displays are rendered with a blue theme.

Elsewhere, gesture and voice control has now made its way into the Golf class, in models specified with the top of the range “Discover Pro” infotainment system. The infotainment options themselves have improved, with screens now ranging from 6.5- to 9.2 inches, higher-resolution displays (up to 1280x640 with “Discover Pro”).

Compatibility with Apple CarPlay, MirrorLink and Android Auto is of course a given, while mobile assistance services like automatic accident notification and breakdown calling are also now available. Semi-autonomous technology is also present, with Traffic Jam Assist, Lane Assist with active cruise control, and a system that notices if a driver has become incapacitated, steering safely off the road should sensors detect a driver not make any steering, braking or acceleration inputs.

Volkswagen has also updated the Golf Estate, which receives all the same alterations, plus new engines, as its hatchback counterparts.