The theory? GTI driver appeal with 188mpg economy. Time to get to grips with reality... 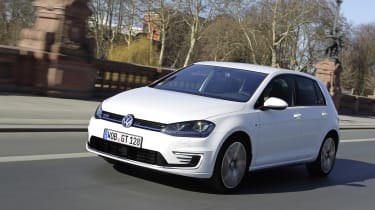 The Volkswagen Golf GTE is a plug-in hybrid version of the perenially popular family hatchback. As the badging suggests though, this is no hair-shirt rival to cars like the Toyota Prius Plug-In.

Volkswagen instead bills the GTE as the third member of its Golf GT family, joining the petrol Golf GTI and diesel Golf GTD. Knowing what we do about those models, that billing suggests this new car will be a keen performer and a fun, engaging hot hatch in a demonstrably grown-up sort of way.

The internal combustion engine is a 1.4-litre, four-cylinder turbo petrol unit, good for 148bhp, and the gearbox is a six-speed DSG. The 75kW (101bhp) electric motor sits between the two and drives through the gearbox. The hybrid drivetrain, which sends power to the front wheels only, delivers a peak output of 201bhp rather than the theoretical combined maximum of 249bhp because the power curves don’t quite converge at their peaks.

According to Volkswagen’s own figures, the Golf GTE is 173kg heavier than the GTI. It’ll sprint to 62mph in 7.6 seconds and top out at 138mph; those performance figures are more closely aligned to that of the 1.4 TSI model than the GTI. In its electric-only mode, it’ll cover 31 miles on a full charge.

It must be said that the hybrid drivetrain does work very well. Urban driving and electric motors, with their near-silent operation and instant torque hit, are so well matched that it’s easy to buy into the Golf GTE as a town car.

The powertrain also offers a switchable mode that ramps the energy harvesting up by such a degree that the driver needn’t bother with the brake pedal in town, although that mode is more off-putting than it is useful out on the open road. There’s a sharp edge to the way the GTE rides on city streets, which is just enough to hint at some degree of athleticism without ruining the ride comfort.

The true depth of the Golf GTE’s sporting merit depends entirely on perspective. If the point of reference is a conventional plug-in hybrid or full electric car there’ll be much to commend about the way the GTE grips securely with solid body control and good agility.

Judged as a traditional hot hatch, however, the GTE is unexciting, unrewarding and possessed of a benign chassis that collapses into understeer rather early – almost every component in the drivetrain is located ahead of the front axle line, after all.

On paper it's a deeply compelling package, but the reality is that the parsimonious fuel economy figures can only be repeated in quite particular circumstances, and in dynamic and performance terms it’s simply not in the same league as its stablemates, the Golf GTI and GTD.

It is, however, the only plug-in hybrid at this price point that holds driving enjoyment in any regard, which puts the GTE at the very top of a class of one. A Prius Plug-In is nothing like as entertaining, and Volvo's V60 Plug-In Hybrid is more expensive and less dynamic.

Perhaps closest in spirit is the BMW i3 with the optional range-extender engine. It's similarly priced - £33,830 before the government's £5,000 plug-in car grant - and has similar performance with a 7.9sec sprint to the legal limit. It's more technologically (and stylistically) interesting than the Golf, but the tall body and skinny tyres result in very different dynamics to the more conventional Volkswagen.

The headline 188mpg figure was achieved on the official New European Driving Cycle (NEDC) test for plug-in hybrid cars. The test is structured so that for two-thirds of its duration the subject is run in electric mode, then in hybrid mode for the remaining third of the test.

That means, then, that the Golf GTE’s petrol engine was only running for one third of the test. By extension, the owner will only replicate that 188mpg figure by running in electric mode for two-thirds of his or her overall mileage. In short, the Golf GTE will only deliver on its grand promises if the owner can plug in regularly and tends only to cover relatively short distances.