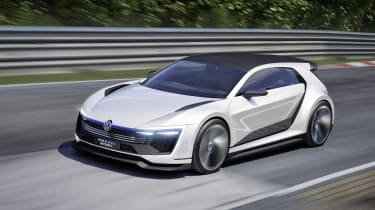 We first saw the GTE Sport Concept at 2015's Worthersee show in Austria, but now we've met it in the metal in Frankfurt. But rather than just being another ambitious, never to make production model, it actually serves to represent just how quickly VW could produce a performance hybrid. All of the technology, know-how and equipment is there - and the GTE Sport Concept is an extreme example of what it could produce when combined. We've had a snoop around the car on VW's show stand, here's what we've learned. 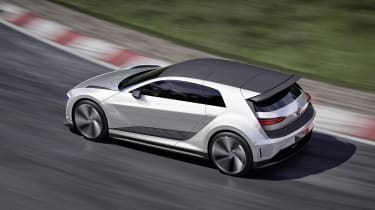 Firstly, this car is nothing like the production Golf GTE. Volkswagen would have you believe its current Golf GTE is the third model in the GTI and GTD line – a hot hatchback that just happens to feature plug-in hybrid power. But while the Golf GTE is an impressive vehicle, it hides its technology and performance under a bushel, with little to differentiate it from the other GT models in the Golf range.

That wouldn’t be a problem if the GTE looked like the Golf GTE Sport concept, first displayed at Worthersee as part of the huge European Volkswagen festival in May. It might contain the word ‘Golf’ in its title, but there’s little in common with the production car. 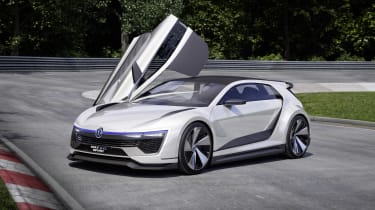 What the GTE Concept does share is the VW badge on the nose and the basic layout of a plug-in hybrid drivetrain. There, the cars diverge – the Concept is a low-slung, two-seater, formed from lightweight carbon and entered via gullwing doors like those of the XL1 eco car.

At its core is a 1.6-litre, turbocharged direct-injection engine adapted from that of the Polo R World Rally Car. On its own the engine develops 295bhp and 295lb ft of torque. The addition of two 113bhp electric motors, one with 243lb ft of torque and the other 199lb ft, raises total system output to 394bhp and 494lb ft. 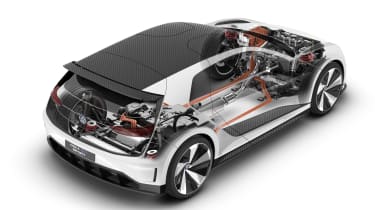 (Electric motors and combustion engines develop their peak power and torque figures at different points, so the two figures can’t simply be added together – hence the discrepancy when adding electric and petrol figures.)

Power from the engine and first electric motor is sent through a six-speed dual-clutch transmission and the front axle, while the second motor handles power to the rear wheels. They can be used individually or all together as an electrically-assisted all-wheel drive, the latter contributing to a 4.3sec 0-62mph sprint and 174mph top speed.

Suspension is tuned for ‘maximum neutrality’, according to Volkswagen, optimised for hot-lapping at the Nürburgring Nordschleife but also at home on regular roads. 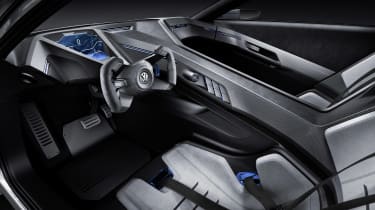 Inside, the car’s two seats are separated into distinct regions for driver and passenger. Trim is a mixture of carbon and microfibre, while the seats themselves are positioned far back in the chassis like those in dedicated racing cars. Shift paddles behind the steering wheel let the driver pick ratios in the dual-clutch gearbox, while split-level transparent display panels position useful information at a suitable distance from the driver.

There are – predictably – no solid plans to make a roadgoing version of the GTE Sport concept, so in the meantime drivers will have to content themselves with the regular GTE, or the more potent GTI Club Sport also previewed at Worthersee and shown in Frankfurt as a production-ready model (see it on video here). But we're certainly excited at the prospect of ultra-efficient high performance models this concept may help to spawn in the future...