Volkswagen facelifts plug-in Golf GTE and lowers the entry price to make it even more appealing. 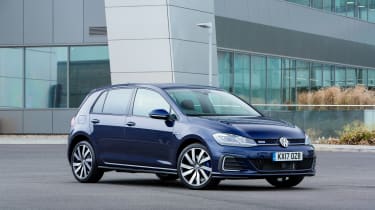 Alongside the range-wide updates that have been lavished upon the standard Golf, VW has revealed pricing for the latest GTE plug-in hybrid, which features a substantial £3420 price decrease from the outgoing model.

Now available in two trims, the more forest friendly Golf has a base price a whisker above £30,500, pricing it only £600 or so above the more traditionally powered GTI. The UK government will be happy to help with the purchase price too, with the GTE eligible for a £2500 rebate dropping the relative price to around £28,000.

> Click here to read our review of the Volkswagen Golf GTI 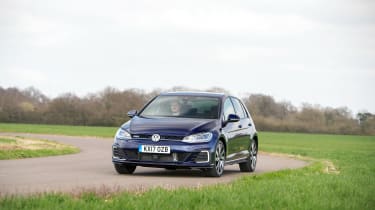 The downside for evo readers is that despite the 'GT' in GTE, the electrified model can't compete dynamically with conventionally powered models like the GTI. Volkswagen has left the mechanical package well alone on this update, so that means on top of a 1.4-litre turbo charged petrol engine with 147bhp is supplemented by an electric motor producing an extra 100bhp.

Like all plug-in hybrids, the total power isn't an exact sum of these peak figures, so total system power is more like 201bhp. The battery pack remains unchanged to the previous car too, meaning an EV range of 31 miles on paper. 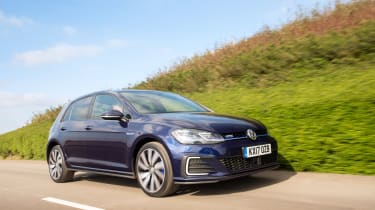 This clever tech doesn’t come without compromise though, as the Golf GTE weighs in at a hefty 1615kg, thanks mostly to the 120kg of batteries on board. As such 201bhp never feels as spritely as you would think and leaves the GTE feeling more sluggish and inert compared to more lithe performance siblings.

The GTE may not excite in the same way as a GTI down a country lane, but it represents the emphasis Volkswagen places on the growth of electrification in its range post diesel-gate. An undeniable result of the pressure the industry has placed on Volkswagen to be a driving force of mainstream electrification, the new GTE’s reduced price will still only appeal to those interested in reduced running costs more than the hot hatch enthusiast.