Henry Catchpole gets to drive the Praga R1 race car, which is powered by a 210bhp Renault engine. Video here 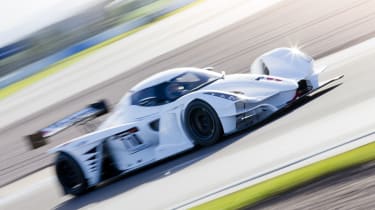 Henry Catchpole recently drove the Praga R1 at Donington race circuit. Although there wasn’t enough video footage for a full video review, he couldn’t help but show the GoPro footage in this Inside evo video. Below are some of his thoughts from the day. Read the full review in evo issue 194, or via the evo App.

I’ve always thought that the modern enclosed Le Mans Prototype racers like the Audi R18 look horribly claustrophobic, and the Praga looks like a futuristic three-quarter-scale version of one of those. Lift the tiny carbonfibre cat flap of a door and the opening into the dark hole of a cockpit looks foreboding.

A mechanic shuts the door. It feels even darker now. If I ever wake up in a pillar box I imagine it will feel something like this. I mentally go through what the routine will be if I need to get out of this cocoon of bare black carbonfibre in a hurry. Then I slowly put the whole procedure into practice – wheel release with both hands, harness release by my belly button, door release by my head, execute manoeuvre like getting out of a fully zipped sleeping bag.

The engine is a fairly humble four-cylinder Renault unit displacing 1998cc, but surrounded by anodised suspension pick-ups, a carbon air intake and the snaking single-exit exhaust, it looks almost exotic. The custom-made Hewland six-speed sequential sticking out the back adds to the sense of purpose too.

At 119,000 euros (about £100,000) the Praga R1 is not cheap, but everyone in the pitlane at Donington is intrigued by it and says how gorgeous it looks. And they’re generally a hard crowd to impress. As a road car, I fear it might be too extreme – I certainly don’t want to be charging down the B660 wondering if the aero will be working enough to take the next corner flat – although ironically the turbo will no doubt make it more lively and fun at lower speeds. We’ll have to reserve judgement until we get the chance to try it.

For the moment we’ll treat it simply as something to go racing in, or for trackdays. Compared to a Caterham or even a Radical it’s not as dynamically malleable, but it does feel more serious, and you’re obviously paying for the carbon monocoque too. As you can probably tell, I also found that there’s something deeply satisfying about exploring the magical world of downforce, and with its enclosed cockpit and relatively safe power-to-grip ratio, the R1 feels like the perfect car to do that in. There’s certainly no need to be nervous.