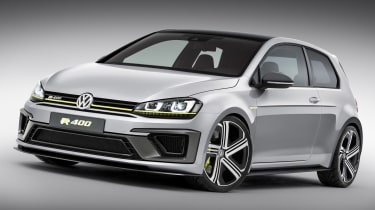 Volkswagen has unveiled a 394bhp Golf R concept at the Beijing motorshow. Based closely on the latest production Golf R, the concept adds another 99bhp and 52lb ft of torque, dropping the 0-62mph time to a stunning 3.9seconds (a full second quicker). The top speed has also increased by 19mph to an impressive 174mph.

Volkswagen hasn’t given many details about the super-tuned TSI engine, but has hinted that it possesses the genes of the company’s WRC engine (although of course that’s a 1.6-litre unit). The power increase means that the 2.0-litre TSI’s specific output has risen to 200ps per litre (197bhp per litre), with maximum power being produced at 7200rpm. Maximum torque of 332 lb ft is produced between 2400 and 6000rpm.

Channelling all this oomph to the road is a 6-speed DSG gearbox and the same Haldex-5 4Motion four-wheel drive system that the production Golf R is equipped with. This means that under low loadings or during coasting the Golf R is still effectively front-wheel drive, only moving the power to the rear axle when necessary (which we imagine would be quite frequently!).

Allied to the Haldex is a raft of electronic systems, such as EDS and XDS+ that use the brakes to give the effect of locking differentials. The ESP also has three modes – On, Sport and Off.

The suspension and tyres are the same as those on the regular Golf R, but the 19-inch wheels are given a new look and greater offset. The ‘Cadiz’ design of the rims now has inserts that act as air vanes to help cool the brakes, which will presumably be coming under greater stress given the power increase. Of course the greater wheel offset means commensurately bigger arches (20mm wider), which VW says recall the 1988 Rallye Golf G60. There is a nod to another historic Golf at the back of the car too, because while the two ‘flying spoilers’ might take most of the attention, the two central tailpipes pay homage to the original R32.

The paintwork of the concept is predominantly a shade called Silver Flake, but where the Golf GTI gets a red pinstripe, the R a chrome pinstripe and the GTE a blue pinstripe, the R 400 gets a Lemon Yellow pinstripe. The yellow is continued inside too, where you’ll find a proper pair of front seats, trimmed in Alcantara and ‘carbon leather’. Real carbon is used in the door inserts although it has a gloss finish in contrast to the matt finish of the exterior carbon parts.

We think there must be something in the VW-group water at the moment, because big-power four-cylinder engines seem to be cropping up all over the place. For starters, Porsche has a four-cylinder in the 919(!) while at the Geneva motorshow we saw the unveiling of the Audi TT Sport concept. That had a 414bhp version of the TFSI engine and we were told that there was no reason the engine couldn’t go into production. Given how much we like the standard Golf R, we can only hope that the R 400 has similar production possibilities.