It’s the Golf you buy when you can’t afford a GTI. We reckon you should save up and spend the extra 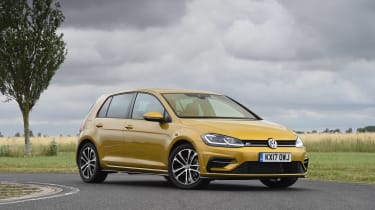 Despite the unsavoury headlines the VW juggernaut continues apace, none more so than the Golf Mk 7.5. The mid-life update to the Golf is pouring into dealerships as quickly as Wolfsburg can churn them out. The big question for VW, of course, is has the world fallen out of love with the company and its ubiquitous C-segment hatch?

The Golf is having a tricky time across Europe, although its near-10 million global sales figures over a year would be coveted by many a manufacturer. VW isn’t holding back on offering something for everyone in the European market – such as this R-Line 1.5-litre TSI EVO model. 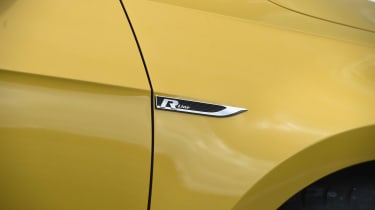 Being an R-Line means a styling pack that includes front and rear bumpers with a hint of GTI about them, a rear roof spoiler, altered radiator grille and side skirts. There’s also a pair of exhausts. Inside there’s a smattering of R logos, leather on the seats and a three-spoke steering wheel.

This 1.5-litre turbocharged four-cylinder replaces the previous 1.4 TFSI engine. Producing 148bhp, it features cylinder deactivation tech and common rail injection, while the internal friction has been reduced over the 1.4-litre by the use of a new fully variable, map-controlled oil pump and a polymer-coated first main crank bearing. The turbo’s injection pressure has also increased to 350 bar (up from 200) and there’s a new coating for the cylinder liners. Fin cooling between the cylinders and a cross-flow cooling concept in the cylinder head are unique to the EVO engine, too.

Two gearboxes are available with the 1.5-litre EVO engine, the new seven-speed DSG or the six-speed manual tested here. Suspension is by McPherson strut at the front and a multi-link rear and VW’s XDS electronic front diff is also standard. Seventeen-inch wheels with a 225/45 tyre are fitted to each corner and the R-Line also has a lower ride height and stiffer spring and damper rates.

R-Line trim also gets you LED running lights at the front and LED tech for the rear clusters, too. Available options, as fitted to our test car include lane assist with dynamic light assist including traffic sign recognition, which cost an additional £630. The full LED dynamic light packages costs an extra £1285, though. 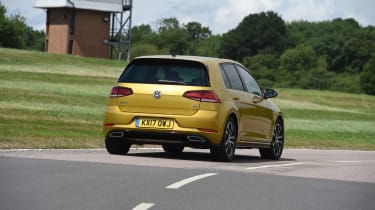 Adaptive cruise control, front and rear curtain airbags, a driver alert system and predictive pedestrian protection are also standard. Inside there is a choice of driving modes – Evo, Normal, Sport and Individual, the latter allowing you to set your own parameters for the steering, throttle, cruise control and air conditioning.

Bluetooth, Apple Car Play and VW’s Car-Net are also included, with a three year subscription included for the latter.

It’s like a Golf. So it feels far more premium than you were perhaps expecting but delivers a driving experience that is more Channel 5 Movies than Netflix. It’s not bad, per se, rather a little uninspiring when it comes to settling down for some serious miles of driving action, like switching over to find Die Another Day showing rather than The Bourne Identity.

The new 1.5-litre EVO engine isn’t as rough as you’d expect if you’ve experienced some of VW’s older small capacity, mid-powered units and it enjoys being revved, which is good because it needs plenty to get going. Its 148bhp and 184lb ft isn’t blockbuster material and unless you select the engine’s sportiest mapping the throttle response struggles to get on with it. Opportunities to pass slower traffic require careful planning in terms of gear selection and engine speed. Fourth doesn’t always have the low down grunt and the top of third can feel a little strained with a narrow operating window. 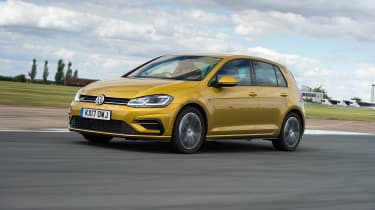 Wind it up and on a flowing road the R-Line can be nicely hustled, its dampers well resolved and its body neatly controlled over undulations. It will never have you grinning like a Group B rally fan sniffing the door handles of a Delta S4 through Kielder, but it won’t have you crying into your McLaren team baseball cap at a Grand Prix, either. It’s just very middle of the road. Inoffensive. Compliant. It’s a Golf.

Away from Volkswagen, BMW’s 120i Sport costs a similar £24,840 but delivers 184bhp and a more useful 214lb ft or torque, which means it’s over a second quicker to 62mph and will top 143mph. It’s quite a bit smaller and less practical inside, though. 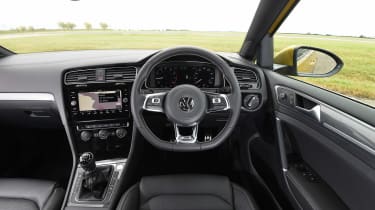