The 266bhp super-Golf recalls a rare homologation special, called the Rallye, designed to take on the Lancia Integrale. We bring the two together. 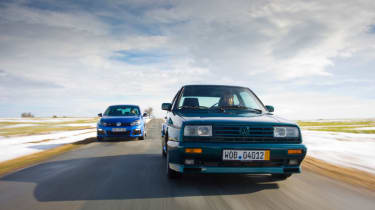 Rain is beading like mercury on the immaculately polished green paintwork, small balls of water running up the bonnet in the slipstream. The people in the car behind are taking photos with their camera-phones the same way tifosi would in Maranello if I were driving a 288 GTO. With its wheels tucked so high up into its box arches that it looks like it won’t ride at all, the Rallye Golf is a rare thing even here in Wolfsburg.

Many people were no doubt saddened by Volkswagen’s decision to drop the Golf R32 and its narrow-angle V6 when the mk5 Golf was retired last year. The fact that the R32’s replacement, the Golf R, is powered by a hotted-up version of the (mk5) GTI’s turbocharged in-line four cylinder must seem like a poor, verging on sacrilegious substitute. Yet it’s really just a case of VW going back to its roots. It all began back in 1989, when the company started the ‘R’ bloodline with the Rallye, which housed a viscous-coupling four-wheel-drive system and a blown version of the 1.8-litre 8-valve GTI engine.

It came about, as its name suggests, because of rallying. The Group A regulations of the time stipulated that you had to build and sell a minimum of 5000 road-going examples of a car to homologate it for competition. So, in order to take on Lancia’s Integrale on the stages of the World Rally Championship, VW hand-built 5000 Rallyes, all left-hand drive, in Belgium. The swept volume of the Rallye’s 1.8 was actually very slightly smaller than any other 1.8-litre Golf engine (1763cc as opposed to 1781cc) so that when it was multiplied by the forced-induction conversion factor of 1.7 it would sneak in just under the 3-litre limit.

Doing the huffing and puffing was a G60 G-Lader supercharger (‘Lader’ being German for ‘charger’ and the capital G representing its distinctive spiral shape), which increased power for the road-going Rallye to 158bhp at 5800rpm and 166lb ft at 3800rpm – up 19bhp and 42lb ft respectively on the contemporary 16v mk2 GTI. Unfortunately, the Syncro four-wheel-drive system added weight. Quite a lot of it. In fact the Rallye tipped the scales at a decidedly hefty for its time 1195kg, or 84kg more than the GTI. The special’s 0-62mph dash was claimed to take 8.6 seconds, but testers at the time struggled to break nine, while consistently hitting 8.2 seconds in the GTI.

I realise that at this point you are probably looking at the older car in these pictures with something less than the excitement you might at first have felt. No longer is your mouse finger itching to go and click around the web in search of one of the 70 Rallyes that came to the UK. But bear with me, because the car you see here is no ordinary Rallye…

In 1990 VW Motorsport produced the Golf G60 Limited. It had none of the extraordinary bodywork of the Rallye, settling instead for a discreet blue line around a standard two-headlight Golf grille. But under the bonnet the G60 supercharger had its first encounter with the 16v engine. The result was 207bhp at 6500rpm and 186lb ft at 5000rpm. Our very own John Barker figured it for Performance Car back in the day and achieved 0-60mph in just 6.4 seconds (he reckoned there might have been more to come too, had he not cracked the rear diff casing!).  Just 71 G60 Limiteds were produced in total, and they were to remain the most powerful Golfs until the first R32 came along 13 years later.

As you might have guessed, a 16v engine has found its way into this particular Rallye, making it arguably the ultimate mk2 Golf. It was owned from new by an Audi engineer until Volkswagen Classic bought it, and they thinks it is probably one of only two Rallyes with the ‘Motorsport Pack’. Driving through the outskirts of Wolfsburg towards more inviting roads, I glance down at the rectangular dash and notice that the odometer reads just 26,600km (16,500 miles).

The Golf R in front has even fewer kilometres under its tyres and is probably about as rare as a Rallye at the moment. The figures for its 2-litre turbocharged engine represent very decent gains over the V6 unit it replaces: 266bhp at 6000rpm (up 20bhp) and 258lb ft at 2500rpm (up 22lb ft). The brrrap issuing from the two fat exhausts indicates that this particular R is equipped with the optional six-speed DSG gearbox, the likes of which 1990s engineers could only have dreamt about. The Rallye got an uprated version of the GTI’s five-speed manual and although there is something enjoyable about the way it slides into gear, there is certainly more loose linkage than tight, mechanical cog-meshing in the feel of the light, cable-operated action. The part-leather Recaro seats are fantastic, however, their bolsters puffed out like the inflated cheeks of some tropical frog.

Thomas Schützendorf from Volkswagen Classic is our local guide today, and I’m not entirely sure where we’re off to. Wherever we’re going, it involves a stretch of Autobahn. I drove the Golf R across from Hanover airport earlier in the day and hit a winter tyre-limited 150mph with astonishing ease, the car settling into an almost surreal, express train-like stability in the outside lane. The fact that, delimited and on summer tyres, this family hatchback could go on to reach 165mph seems faintly ludicrous.

The Rallye generates a little more wind noise, but feels equally comfortable as we hit 120mph in a short blast (some 19mph short of its maximum). The shove which gets it up there is the truly extraordinary thing, though. There is no audible supercharger whine, just a tremendously sustained torque-rich surge from low revs through to 6000rpm. As it is, it’s only a second slower than the R to 60mph and you begin to imagine that, with a six- instead of five-speed ’box, it could really make the newer car sweat.

As slip road leads to A-road leads to village leads to surprisingly narrow and bumpy B-road, it becomes increasingly clear that, despite having ABS, the Rallye can’t even approach the R’s stability under braking. You find yourself planning just that little bit further up the road, readying the car a greater distance before any corners. The Rallye’s suspension was lowered a further 20mm over the mk2 GTI’s (although it looks even more drastic than this), and it was also given firmer dampers, tauter springs and thicker anti-roll bars. Despite all this it still manages to handle the bruised and bulging winter-damaged tarmac with aplomb, never distracted from a line or shuddering over bumps. The R up ahead looks utterly composed too.

Attacking a corner in such a rare and pristine car is always slightly nerve-wracking, but the Rallye feels as solid as its reputation would have you believe. The steering as you turn in is slower and needs a touch more lock than you initially expect from its weight, and you can feel the front want to push slightly wide without ever really doing so. The four-wheel drive lends stability to the cornering technique rather than any rear-led edginess, allowing you to wake up the engine as soon as you’ve dragged a wheel across the apex of the corner, safe in the knowledge that you’re going to get supreme traction and a smooth, clean exit. Slow in, fast out.

The R is a much sharper tool, as you’d expect, with a much quicker inclination to turn flatly into the same corner. And yet there’s a very definite similarity to the two cars’ behaviours, a smooth poise and stability to the way they tackle corners. The R never feels like it will get ragged, whatever you do. Trail-brake a little and you can set the car neatly on line as you enter the corner, then you can get on the throttle early and the quicker-reacting viscous coupling will shuffle just enough power to the rear to smear it round and leave you accelerating up the next straight at the earliest available opportunity. You can feel the added weight of the four-wheel drive in the R, but it’s a more honed and more enjoyable car in which to attack a road than the current GTI.

What would be great would be if the R had some of the Rallye’s swagger. With the R you really have to look for the design nuances to be sure that it’s the hottest Golf of all before you wield a camera-phone. With the Rallye, while it’s true that the box arches and square headlights can make the uninitiated (me included until I did some research) think that it might be an aftermarket conversion, those big, Quattro-esque wings were in fact penned by VW’s then chief designer, Herbert Schäfer, and they’re proper steel items. There’s certainly no mistaking the Rallye for a regular GTI.

After a day driving the two cars around the roads outside Wolfsburg there’s no doubting that the new R is a better car to drive, but you somehow want the packaging to be a bit more daring and live up to the Racing that the new R stands for. There are glimpses of character – I love the way it idles slightly faster if you switch the DSG ’box from Drive to Sport – and it’s hugely desirable and phenomenally quick, but sometimes when you want it to cut loose it can seem little bit sensible. Perhaps with the next R the bloodline really should go right back to its roots and be a homologation special…