Refined and impressive, but not especially sporty 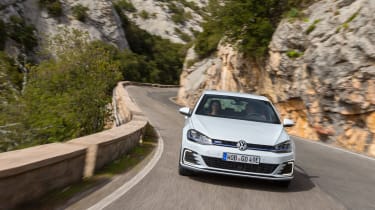 The Volkswagen Golf GTE is one car in the triple-threat that is the Golf GT range, the new updated hybrid hot hatch joins the new facelifted traditional petrol powered GTI and the diesel GTD. With a 0-62mph time of 7.6sec the hybrid is the least potent of the set, but if the GTE displays any of the attributes that make the sporty Golfs so popular – a refined and capable chassis being the most obvious – then it certainly shouldn’t be discounted.

> Read our review of the new 2017 Volkswagen Golf GTI

The GTE always starts in its most economical mode. So, if the batteries have enough charge, you set off in pure electric mode. If you wish you can select a pure electric mode and, with a completely full battery, the GTE will cover 31 miles before resorting to the help of its petrol engine.

Left to its own devices though the hybrid hatch will identify what’s the most economical way for it to make progress, so depending on the speed or situation it might call upon the internal combustion engine for a little boost.

Press the GTE button near the gear selector and the two power sources then work together to give maximum possible performance rather than being as fuel efficient as possible. 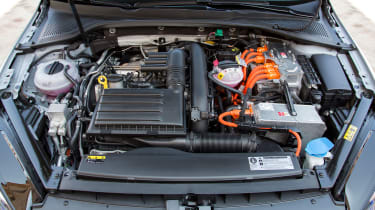 The motors in the GTE combine to give the car 201bhp, the brunt of which is produced by the four-cylinder 1.4-litre turbocharged engine. A 75kW (101bhp) electric motor sits between the petrol engine and a six-speed twin-clutch gearbox. Power is sent to the front wheels only.

> Read about VW's plans for an all-electric Golf GTI

A bunch of batteries sit under the rear seats ahead of the back axle and contribute to the GTE’s not insignificant kerb weight of 1615kg, 229kg more than a GTI. Considering its weight the GTE manages to accelerate from 0 to 62mph in a respectable 7.6sec. That might be 1.2sec slower than a GTI, but it isn’t embarrassingly slow either.

The near silent electric drivetrain, the car’s default when setting off, makes the GTE feel very refined. The solid interior, big infotainment screen, and a ride that’s far more settled than you’d expect of a car on 18-inch wheels add to that sophisticated feel, too.

When the engine does cut in, it does so in such a progressive manner you’re barely aware you’ve switched on the conventional engine. It’s a welcome contrast to the thrum and lurch that accompanies the activation of the internal combustion engine in most hybrids. The GTE’s drivetrain feels a generation ahead of most other dual-motor vehicles and is a truly pleasant car to use at low speeds.

Put your foot down and there’s a significant and immediate jolt forward, provided you're in the right gear. Most of the time you don’t get the advantage of the instant torque from the electric motor, instead, before there’s any acceleration, the gearbox needs to kick down to the correct gear as the electronics decide just how much of each power source it wants to use. Even in GTE mode it doesn’t quite pre-empt when you might want to relish in the instant acceleration. 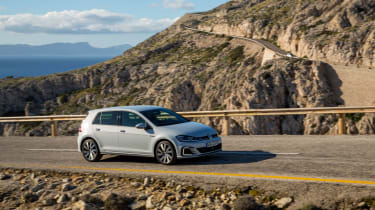 That’s a good enough reason as any then to use the manual mode for the gearbox. At full throttle when you’re driving hard, the up-changes are snappy and quick. When going down the ‘box you need to be travelling slower than you expect before the next gear will engage, but when it can change it does so efficiently. When driving slowly the changes aren’t anywhere near as prompt, but they do match the more relaxed style so it’s never a real issue.

Sadly, only the GTE’s engine shows any signs of immediacy and verve; the chassis simply doesn’t display the verve that’s evident in modern hot hatches. Instead, it feels heavy when driven quickly as the body slowly rolls onto the outside wheels.

There is a degree of adjustability though, as the brake regeneration system creates a similar effect to severe engine braking, and a lift mid-corner does prompt the rear axle to react. But the severe stability control, which cannot be turned off, stops the slide developing into anything that actually needs reacting to and the GTE remains best driven more sedately. 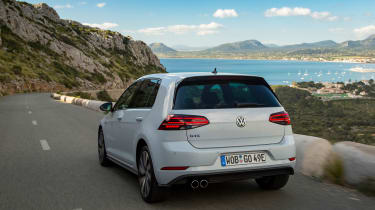 A basic GTE costs £30,635, a not insignificant sum - £2715 more than a GTI. But to offset that initial cost there’s are the obvious fuel savings that a hybrid can offer and VW claims the GTE can average 166.2mpg.

> Read our review of the Volkswagen Golf GTD

The GTE’s biggest rival is not just another Volkswagen, but another Golf. The diesel powered GTD, with 181bhp and a 0-62mph time of 7.5sec, is only a little bit faster than the GTE and it’s £3410. Despite its diesel motor it still can’t match the hybrid’s economy, but the diesel is more nimble than the portly part-electric Golf.