A VW Golf GTI Speedster is the latest concept car in the Vision Gran Turismo series. 500bhp and four-wheel drive 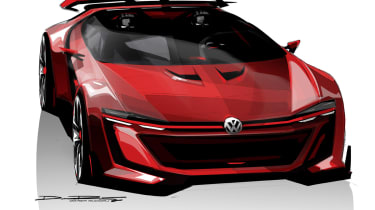 Volkswagen has revealed sketches of its Vision Gran Turismo concept ahead of its Worthersee show debut.

It’s effectively a roadster version of last year’s Worthersee concept, a wild Golf GTI. A 3-litre VR6 twin-turbo engine produces 496bhp and 490lb ft of torque – figures which are more than double those produced by the standard 2-litre GTI – with drive to all four wheels through a seven-speed DSG twin-clutch gearbox, a new unit able to handle this GTI’s vastly superior peak outputs.

Carbon-ceramic brake discs sit behind 20in alloy wheels, and while we’ve only seen these sketches so far, it’s fair to say this is a pretty bold looking car. In proper speedster style, the interior can only accommodate two, while there’s a carbon instrument pod, a wild steering wheel (which appears to contain a rotary gear selector) and cushioned pads upon a carbon structure rather than traditional seats.

VW joins BMW and Mercedes in launching a concept car that’s been designed for use in Gran Turismo 6, after a call by creator Kazunori Yamauchi for carmaker’s to celebrate his PlayStation game’s 15th birthday.

The annual Volkswagen Wörthersee concept has been uncovered, this time applying tweaks to the plug-in hybrid Golf GTE
Volkswagen Golf 1.5 TSI 2020 review – an encouraging base for the next GTI