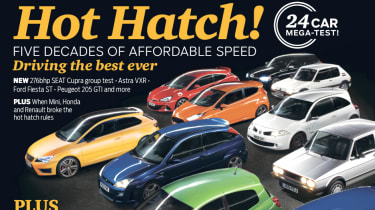 Buy a copy of evo 195 in our online shop

LETTERS…speaking of which, moans aplenty sparked by Dickie’s column last month, in which he worried about the youth of today

GREATEST EVER HOT HATCHESThe hot hatchback is as important to us as the supercar. It’s not merely the accepted entry point into performance car ownership, the genre also contains some true automotive icons. Here, the 15 greatest hatches of the past 40 years three-wheel and lift-off oversteer their way around the evo Triangle in one of our biggest and most fun group tests ever

VW GOLF R v RIVALSIf that isn’t enough hot hatches for you, the new kids on the block – the 297bhp, four-wheel-drive Golf R and Ring-conquering Leon Cupra 280 – tackle the class best from BMW, Renault, Vauxhall and VW EXTREME HATCHESDoesn’t a hot hatch need back seats and a parcel shelf? What the heck… Here’s a battle between three of the most hardcore offerings – Mégane R26.R, Civic Mugen and Mini GP KOENIGSEGG ONE:1Meet the world’s first ‘megacar’ – the 1000kW (or 1341bhp) Swede with a smörgåsbord of tech

LAMBORGHINI HURACÁNAfter ten years in production, the Gallardo accounted for very nearly half of all Lamborghinis ever built. Needless to say, its Huracán successor has some pretty big suede driving moccasins to fill…

LAMBO BAMBINOSA potted history of baby Lamborghinis, from Urraco through to Gallardo

EVO KNOWLEDGEPromised yourself a new sports car just in time for the summer? Go hardcore – get a Vauxhall VX220

Buy a copy of evo 195 in our online shop