Infiniti has released a new image of the new premium compact car, called the Q30, which will be built at Nissan’s Sunderland car factory 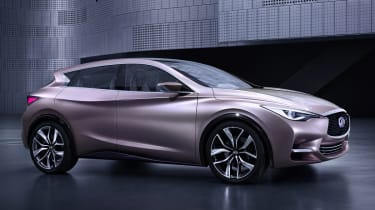 The first image of the Infiniti Q30 concept car has been released ahead of the official reveal at the Frankfurt motor show next month. The new small Infiniti model, based on the Infiniti Etherea concept, has got the go-ahead and will be built at Nissan’s Sunderland plant in the UK.

Previewed by the Infiniti Q30 concept - shown in the image above - it is set to target both hatchbacks and small SUVs with a crossover body style.

'This Infiniti Q30 Concept is a prelude to the product portfolio expansion which underpins our aggressive global growth strategy,' said Johan de Nysschen, Infiniti president. He confirmed the car will aim for a younger customer than Infiniti's current models, which rival the Mercedes E-class as well as sporty SUVs like the BMW X5 and Porsche Cayenne.

The new model is likely to be built around the same underpinnings as the Mercedes A-Class, and will compete against other small premium cars currently on sale – like the BMW 1-Series, Audi A3 and Lexus CT200h among others.

To prepare the Sunderland factory for the new model – which will see capacity increase by 60,000 units per year – Nissan plans to invest £250million, creating around 1000 new UK jobs.