The Audi A8 is facelifted for the 2013 Frankfurt show, and there's a new Audi S8 sports saloon too 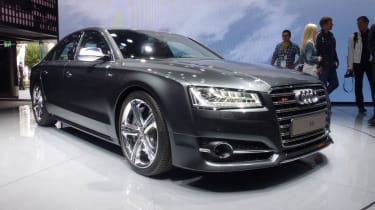 The new Audi A8 has debuted at the 2013 Frankfurt motor show, and there's an updated S8 sports saloon too. Audi's flagship limo needs to keep up with the newly unveiled Mercedes S-class, so it gets updated engines and some particularly trick new LED headlights.

The new range of engines is now fully EU6 compliant, with most showing increased power figures and reduced fuel consumption. Spiking our interest most is the S8, which gets a 513bhp 4-litre twin-turbo V8 petrol engine and quattro all-wheel drive, endowing it with a faintly ludicrous four second 0-60 time, though the top speed is inevitably limited to 155mph. Without that, we imagine an indicated 200mph would be perfectly plausible. COD - cylinder on-demand - ensures four of the eight cylinders are cut off under light throttle load, leading to a small sports car-like 225g/km CO2 emissions figure.

Adaptive air suspension is standard, as is Audi's sport differential, which should ensure enough of the power can be shuffled between the rear wheels to allow a modicum of fun to be had. There are plenty of S-model styling cues, including a chromed grille and chunky 20in alloy wheels.

There's room for another stonkingly powerful petrol engine, too, with a 493bhp 6.3-litre W12 also featuring cylinder deactivation. Other petrols include a a 4.0-litre V8 producing 429bhp and a 306bhp 3.0-litre V6. Diesel engines, no doubt the volume sellers, include the sensible 254bhp 3.0-litre TDI and a 380bhp 4.2-litre TDI which now boasts an increased torque figure of 627 lb ft, more than most supercars. There’s also the 2.0-litre TFSI-engined Hybrid model.

Although only available as an option, the new ‘MatrixBeam’ headlights feature 25 individual LEDs, which combines an onboard camera with predefined map data to illuminate the road precisely where needed. The system also avoids dazzling other road users.

UK prices will be confirmed closer to launch, although are unlikely to change much from the current model. First UK deliveries are expected in January next year.