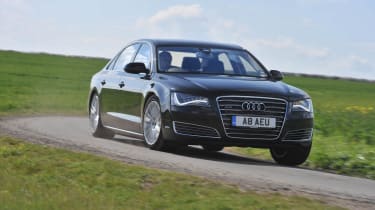 A revised – and even more powerful version – of the range-topping Audi A8, with direct injection and a capacity increase boosting the output of the engine to a towering 493bhp.

Bigger bores have taken the capacity of the W12 engine from 6-litres to 6.3-litres, and the arrival of direct fuel injection means that the new motor has an extra 49bhp compared to the previous version. Power is directed to all four corners by the combination of Audi’s quattro drivetrain and a standard eight-speed autobox.

Otherwise the range-topping A8 continues as before, with copious standard kit and the option of a long-wheelbase version which adds an extra 130mm of rear leg room.

As before, the A8 is a car that’s clearly been engineered around the needs of the occupants in the back, rather than anyone sitting in the driver’s seat. The chauffeur-spec drivetrain has been optimised for waft and comfort above anything else, with a long travel throttle pedal and silken low-speed responses from the gearbox. Ride quality on the air springs is brilliant, and high-speed refinement is exceptional – at 80mph, this must be about the quietest car there is.

It’s quick, too – at least, it is once you get past the throttle’s initial slowness. With warp fully engaged Audi claims the two-tonne A8 can blast its way from rest to 62mph in a scarcely feasible 4.7-seconds, with top speed only curtailed by the 155mph limiter. It’s a neat party trick, but not one you reckon that many long-wheelbase A8s are going to be called on to do without Jason Statham at the wheel.

As before, the mass of the big engine defines the rest of the dynamic experience too, with a front-heavy feel that pretty much negates any desire to push on twistier roads. The steering is over-light even by the standards of Audi’s generous assistance, too.

To the rest of the A8 range, not particularly well. The bog-standard 3-litre TDI version is not much more than half the price of the W12, and the mighty 4.2-litre V8 TDI version – which offers all the performance any owner is ever likely to demand – is thirty grand cheaper. Alternatively, for anyone looking to combine waft with some driving appeal, the turbocharged S8 is quicker and considerably more fun to pedal hard.

Audi admits the W12 will sell in tiny numbers in the UK – it’s real role is in Asia, where buyers are happy to fork out big money to know that their car is the most exclusive.

Economy isn’t quite as bad as the official 23.7mpg economy figure might suggest – we managed 25mpg over several days of mixed use, including rapid motorway cruising. Drive it hard, though, and you’re looking at mpg in the mid-teens.