Audi has launched a hybrid version of the A8 saloon featuring a 2-litre TFSI petrol engine and electric assistance, claimed to be capable of 44.6mpg 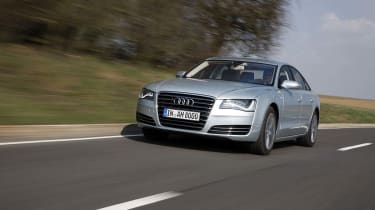 A petrol-electric version of Audi’s flagship saloon, driven here the best part of a year before it goes on sale in Europe in 2013. Unlike its upmarket rivals, the A8’s hybrid powertrain has been built to maximise economy rather than deliver a performance boost. The headline figures are a combined system output of 241bhp along with 44.6mpg.

The Hybrid’s green mission means that it’s the first A8 to use a four-cylinder engine, with the familiar VW group 2-litre TFSI turned longitudinally and working in conjunction with an electric motor mounted between it and the standard eight-speed automatic gearbox. Drive is supplied to the front wheels only.

The engine produces 208bhp and the motor adds another 42kW – or 53bhp – of part-time boost. Unlike the standard A8 there’s no torque converter, rather a multi-plate clutch that connects and disconnects the engine from the electric motor as required. Audi claims the A8 can run in ‘electric only’ mode at speeds of up to 62mph for up to two miles, with the electric motor able to work in conjunction with the TFSI engine up to the 145mph limited top speed.

The lithium-ion battery sits underneath the boot floor and stores 1.3kWh of charge, with both the motor and the battery being water cooled.

Disappointing, if we’re honest. All of the eco tech has created a strangely joyless driving experience, without the sort of effortless waft that A8s have pretty much always delivered. The 2-litre petrol engine is a vocal unit, and although it doesn’t seem to have any problems motivating the A8’s 1870kg bulk, it makes a surprisingly coarse noise while doing so. The clutch that divides the petrol and electric sides of the powertrain can also be felt engaging and disengaging at urban speeds, which knocks the refinement further.

Despite being front-driven – all UK A8s are currently Quattros - the Hybrid rarely feels short of traction, and although the initial throttle response is eco-boosting light, there’s decent urge to be found when you press it further and get the petrol-electric powertrain working together. The steering has an artificial weight to its assistance, though – this isn’t a car you’re ever likely to want to go and hustle.

In terms of raw eco numbers, Audi is right to claim that the A8 Hybrid leads the pack of current challenger, and the official fuel economy figure is actually slightly over that offered by the 3-litre TDI Quattro which Audi hints it will be priced against when it’s launched in the UK.

Instead of a rev counter the A8 Hybrid gets a ‘power meter’ which shows the percentage of the total combined power being used at any time.

Under gentle use we managed an indicated 35mpg.