Volvo has shown the new Concept Coupe at the Frankfurt motor show, which re-imagined the classic P1800. Pictures and show video here 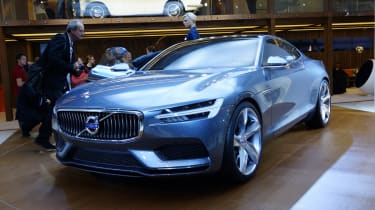 Volvo has revealed its new Concept Coupe at the Frankfurt motor show. With echoes of the classic P1800, the concept showcases the company’s new Scalable Product Architecture (SPA), which will underpin future Volvos.

Hoping to show off the adaptability of its new platform, this is just the first of three concept cars. The design also points towards what Volvo’s future models, including next year’s XC90, will look like.

The concept is the first time we have seen a car from Volvo’s new design chief Thomas Ingenlath. It features Volvo’s new corporate front end, including ‘floating’ front grille and a new headlight and LED running light arrangement.

It also shares many of its design features with the classic P1800 Coupe, although Ingenlath claims that it has nothing to do with being retro, simply respecting such an iconic piece of the company’s past. The shape along the rear of the car's flank is perhaps the most obvious.

Powering the concept is Volvo’s new plug-in hybrid drivetrain, and four-cylinder Drive-E engine. Volvo claims power to be equivalent to that of a V8 engine. The concept also features special seat belt buckles, which celebrate the company's history of pioneering safety technology.

At this stage, the Coupe is purely a concept car, and there are no plans to put it into production.