The Renault Megane has been updated, with a reveal at the Frankfurt motor show 2013. Pictures and details here 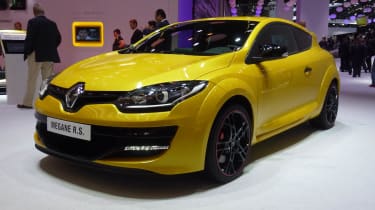 The Renault Megane has been updated after five years on sale. Revealed at the Frankfurt motor show, the facelift is applied to Coupe, hatchback and Sport Tourer models, as well as the Renaultsport Megane 265 in its standard and Cup guises.

Designed to ensure the new Renault face, as seen on the Clio, Captur and other new models, is carried over to the Megane, the update is limited to a fresh nose. Pictures show that the biggest change to the look of the car is a new set of headlights, as well as a revised grille and bumper. The elliptical headlights feature a distinctive gloss black background.

Renault has yet to announce any revised prices for the Renaultsport Megane, but it is likely that the basic 265 Cup, one of evo's favourite hot hatches on sale today, will remain at £25,545. The Megane 265 combines a 261bhp 2-litre turbo engine with a sharp front-wheel-drive chassis, including an impressively effective differential, and it completes 0-60 in six seconds on its way to a 158mph top speed, putting it ahead of many electronically limited German performance cars such.

The facelift comes five years into the Megane's life, when most of its rivals have a typical six-year lifespan, facelift or major update included. This suggests the current Megane will remain on sale for another two to three years, at least.