Lexus has revealed the LF-NX, a new compact crossover concept that could rival the Range Rover Evoque. Pictures and details here 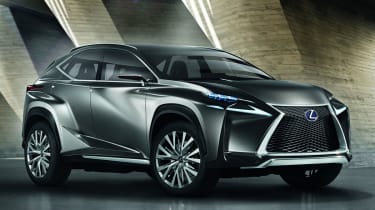 Lexus has revealed pictures of the LF-NX concept car, ahead of the public debut at the Frankfurt motor show next week. The concept car is a mid-size crossover, which could go on to rival the likes of the Range Rover Evoque, Audi Q3 and BMW X3.

The concept is powered by a new version of the Lexus hybrid drive system, which is related to the 2.5-litre petrol engine and electric system in the IS300h, which produces about 200bhp.

Designed to be a striking concept car, the LF-NX features a strong evolution of the current Lexus design language, including that trademark spindle grille. Lexus has tried to give the SUV a coupe like appearance, with plenty of attitude.

Inside the concept, the cabin is what Lexus calls a ‘Human Oriented’ dashboard with upper and lower displays, touch-sensitive electrostatic switches and touchpad Remote Touch Interface design. To give a premium feel, the centre console is sculpted out of aluminium.

More details are expected to be revealed at the Frankfurt motor show next week, where we should find out if Lexus actually plans to put the small stylish SUV on sale.