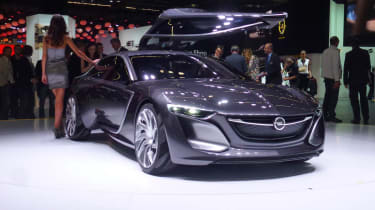 The new Opel Monza has been unveiled at the 2013 Frankfurt motor show. And it's looked like something of a show star, attracting crowds throughout press day despite first pictures and details emerging nearly a month ago.

Vauxhall says the car gives styling nods to its 1980s namesake, though sadly this Monza is not a front-engine, rear-drive sports coupe to rival the back-to-basics Toyota GT86 and Subaru BRZ. Instead it is a hybrid powered, gullwing door-equipped concept car said to provide a glimpse at future Vauxhalls. We live in hope this extends further than the headlight design of the next Insignia, as this is a bolder piece of design than anything currently wearing a Vauxhall or Opel badge.

The Monza sits between the Astra and Insignia, measuring 4.69 metres long. Its side profile has a hint of the old Vectra-based Vauxhall Signum, though this is a much more modern design, while the gullwing doors – which cover both front and rear seats – are pure concept car, as are the huge, turbine alloy wheels. Vauxhall talks of greyhound dogs and ocean waves when describing its styling (really), but in truth its simply a smoothly styled concept of a future family car with some familiar Vauxhall elements around the front grille and headlights.

Inside, a singular, LED screen with 3D graphics replaces a conventional dashboard. There’s promise of advanced internet connectivity with car-to-car communication, its benefits including the ability relay traffic information.

The Monza forgoes the silky straight-six power of its 1970s and 80s namesakes, instead using a development of the Vauxhall Ampera’s range-extender drivetrain. It combines electric drive with a CNG gas powered 1-litre three-cylinder turbo engine. There’s no word on power and performance yet, though given how far this car is from showroom reality in its current form, such numbers might be an irrelevance. Given the car's favourable reaction from the Frankfurt press day attendees, though, elements of it may edge much closer to production once the show shuts up shop.