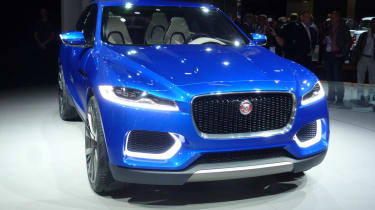 Jaguar has unveiled the C-X17 SUV concept car at the Frankfurt motor show, which showcases the company’s new ‘highly advanced, modular aluminium architecture’, known internally as iQ[Al] - which stands for intelligent aluminium architecture. As well as being lighter than a steel frame, the new chassis is said to be much stiffer too.

The 4x4 crossover Jaguar C-X17 is a first for the company, although there has been talk of a Jaguar SUV since the early 1990s. The design study gives a good idea of what the finished model might look like. At the rear, the concept shares DNA with the F-type, including the curvaceous shoulder line and identifiable rear light clusters. The four-seater concept is said to blend ‘sporting design and luxurious sophistication with enhanced practicality’.

The nose of the concept features a new evolution of the XJ’s recognisable front grille, which is set in between the LED headlamps, J-shaped running lights and frosted-glass foglights. A set of 23-inch alloy wheels gives the concept a particularly sporting stance.

The interior is pure concept car, featuring four individual bucket seats and a contoured panoramic roof. Almost everything is covered in high-quality leather, including die-cut Houndstooth-pattern leather patches on the main leather panels to create a layered effect.

When a production-ready SUV model appears, Jaguar will already be building a new model on the platform. The company says that the first model to actually use the iQ[Al] architecture will arrive in 2015 – alluding to a new premium C/D segment sedan that could emit less than 100g/km of CO2.

Jaguar says that all new iQ[Al] will feature engines with a wide range of capacities and outputs, which will be designed and built in the UK at Jaguar Land Rover’s new £355m engine plant in Wolverhampton. Jaguar has also confirmed that the V6 engine currently used in the F-type has been designed to work in the new aluminium architecture.

If and when the Jaguar SUV goes into production, it will not only have to fight rivals like the Porsche Cayenne, BMW X5, Audi Q7 and Mercedes ML, but also be careful not to tread on the toes of Land Rover, with its Range Rover Sport model.