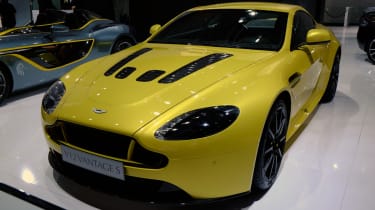 Aston Martin has revealed the the wildest Vantage yet, the new V12 Vantage S, at the Frankfurt motor show. One-77 hypercar aside, this new V12 Vantage S is the fastest road going Aston yet released, with a 205mph top speed nudging it 3mph beyond the standard Ferrari 458 Italia and Lamborghini Gallardo.

The S replaces the current V12 Vantage, gaining a new ‘AM28’ version of its 5.9-litre V12 engine, with 565bhp and 457lb ft outputs representing rises of 55bhp and 37lb ft. New engine management, CNC machined combustion chambers and hollow cam shafts are among the engine tweaks. More torque arrives from lower revs, Aston aiming to ‘flatten and fatten the torque curve’. While the 205mph top speed confirms a 15mph improvement, no 0-60 time has yet been announced. The outgoing V12 hits 60mph in 4.1sec.

The V12 is also linked to ‘Sportshift 3’, the latest iteration of Aston Martin’s automated manual transmission  - boasting seven ratios - and a direct replacement for the existing V12 Vantage’s six-speed manual gearbox, a transmission that looks to be leaving the Aston range altogether. The two-pedal transmission is 25kg lighter than the stick shift it ousts, and comes with steering column-mounted paddle shifters. At 1665kg, the V12 Vantage S is 15kg lighter overall than the V12 Vantage.

A new sports exhaust, derived from the One-77, boosts the already vocal Vantage’s soundtrack and there’s a quicker steering rack. The Vantage also gets its first adaptive damping system, with Normal, Sport and Track modes altering the suspension as well as the amount of power steering assistance. A Sport button sharpens the throttle response, gearshift times and exhaust note.

The V12 Vantage S looks appreciably different to its less powerful forebear, with lots of dark detailing. The front grille is now carbonfibre (a move apparently inspired by the Aston Martin CC100 concept), the roof and bootlid gain black paint and there’s a set of ten-spoke forged alloy wheels. The V12's famed carbon bonnet vents remain. Inside, personalisation is high on the agenda with a variety of carbon, leather and Alcantara trim choices.