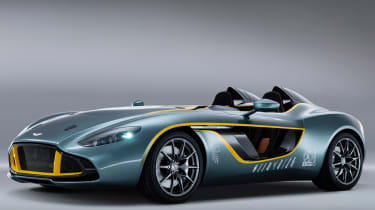 Aston Martin is celebrating its 100th birthday with this bold CC100 concept car.

It’s a wild roofless speedster based on the V12 Vantage supercar, and is initially reminiscent of the Mercedes SLR McLaren Stirling Moss. It’s designed to meld influences from the 1959 Aston DBR1 – which, coincidentally, Moss won the 1959 1000km of the Nurburging in – with hints of Aston Martin’s future design direction.

There’s no roof or glass, while in the place of conventional doors are opening safety bars, leading to substantial side openings. The chassis is aluminium (the same VH architecture that underpins most road-going Aston Martins) while the body is all carbonfibre, but painted with the same patented treatment as the new Vanquish and One-77 so that its natural weave can’t be spotted. It’s a two seater, but with a relatively spartan, racecar-like interior with lots of varnished carbonfibre. Overall, the CC100 weighs nearly 400kg less than a V12 Vantage, at an Audi TT-like 1370kg.

There’s no gearstick, Aston Martin’s six-speed automated manual Touchtronic transmission mated to the 565bhp version of Aston’s 5.9-litre V12 engine, as seen in the new Vanquish, though the wheelbase and basic chassis components are the same as its smaller Vantage sibling. Its top speed is limited to 180mph while 0-60 should take around four seconds. We’d recommend a helmet before attempting either…

While not homologated for road use, the CC100 has working lights, a functioning heater and ESP. The car will perform parade duties this summer – including a lap of the Nordschleife prior to this weekend’s Nurburgring 24 hours, while an appearance at the 2013 Goodwood Festival of Speed seems a given – before being sold to an owner for a ‘mid-ranking six-figure sum’; around £500,000 in simple terms, much more than the V12 Zagato. And the good news? That owner plans to drive it regularly.