The Aston Martin Vanquish name returns via a carbonfibre bodied DBS replacement. What's it like to drive? 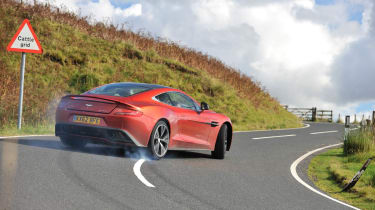 What is it? The new Aston Martin Vanquish. It replaces the DBS and gets a reworking under the skin, more aggressive styling and an iconic name from recent Aston history. It costs from £189,995. Technical highlights? There’s full carbonfibre bodywork and a 25 per cent stiffer chassis with 75 per cent new parts over the DBS. The rear wheels are driven by a reworked version of Aston Martin’s 5.9-litre V12, which is mounted 13mm lower and produces a storming 565bhp and 457lb ft – rises of 55bhp and 37lb ft. They yield a quicker 0-62mph time (4.1sec), though the Vanquish’s 183mph top speed is curiously 8mph slower than the DBS’s. An Adaptive Damping System (ADS) adjusts the dampers; suspended by double wishbones all-round, they are continuously variable but Normal, Sport and Track modes dictate the parameters within which they work. What’s it like to drive? It feels different - in a good way. It’s thanks to that new lighter, stiffer chassis, which permeates every control. The steering is smoother and rarely gets that nasty corrugated judder that has always affected VH-platform Astons. You just know it’s located better and that it’s turning wheels that are in tune with the surface. The ride is quite hard in Sport but the damping only ever needs one bite to deal with bumps, and the turn-in response and mid-corner feel is so much more secure thanks to that efficiency. Like the short-lived Aston Martin Virage (launched in 2011, and now defunct), the Vanquish also has superb traction in the dry and feels less edgy than the sometimes unpredictable DBS. Skimming over crests, plunging into left-right compressions and thumping out of tight hairpins, the Vanquish is hooked-up and agile. And save for quite a lot of road noise, the Vanquish plays the bewitching big-lunged GT on motorway journeys perfectly.  However, the Touchtronic 2 transmission – a six-speed ZF torque-converter automatic with paddle-shift – is a disappointment. Around town it’s refined and slips into the background, but it lacks the creamy seamlessness of the new-generation ZF eight-speed automatic gearbox. How does it compare? Aston’s GT car rival usually comes from Ferrari. But where the old Vanquish battled the similarly powered 575M, the new Vanquish is considerably outgunned by the 730bhp and 211mph (though £239K) F12 Berlinetta. Closer, then, is the 563bhp, 197mph and £168K Mercedes SLS AMG. The Vanquish is a more balanced, reassuring car to drive, but many will prefer the Merc’s madder looks. Anything else I need to know? There’s plenty more to say about the second-generation Aston Martin Vanquish, and it’s all in a glorious drive to the Scottish borders in the latest issue of evo, on sale now.