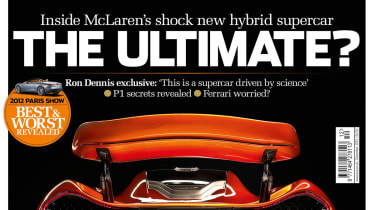 Buy a copy of evo 176 in our online shop

NewsThe hot (and not) from the 2012 Paris motor show, plus news of Bentley’s long-hinted-at return to motorsport

ColumnsPorter bigs up the Dacia Duster, Metcalfe bigs up Dany Bahar and Needell bigs up… his own son

LettersRange Rover, Peugeot and the Scottish Highlands get it in the neck, among others

McLaren P1It’s been a long time coming, but the modern-day McLaren F1 is here. And it’s a bit different this time around, with exceedingly bold styling, an immensely powerful hybrid drivetrain and a simply colossal airbrake. And only two seats. Find out more here…

Porsche 918 SpyderThe P1 won’t have the hybrid hypercar class to itself, though; Harry Metcalfe rides with rally legend Walter Rohrl in one of its arch rivals, the Porsche 918

New Vanquish drivenIt might not look revolutionary, but much has changed as Aston Martin DBS morphs into Vanquish mk2. Jethro Bovingdon heads for the twisty roads of the Scottish Borders to see what’s whatPorsche 911 by SingerThe best 911 might not actually be made by Porsche. Richard Meaden drives a bespoke labour of love in California that nearly sets his credit card ablaze

Lamborghini road tripHenry Catchpole recces Lamborghini’s scenic 50th birthday party in a rear-drive Gallardo, a year ahead of the eventFerrari F1 car driveHe might have a pretty hefty racing CV, but Meaden’s quaking in his little Alpinestars as a drive in Michael Schumacher’s F1 car looms

Long-term testsFarewells to our Mini JCW Coupe and BMW 520d – but are they fond ones? Meanwhile, one of evo’s biggest faces returns…

Buy a copy of evo 176 in our online shop