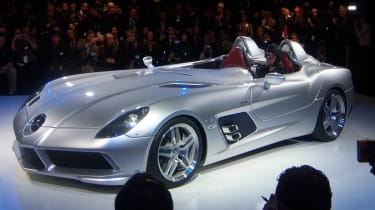 This rather extreme supercar is the fifth and final piece of the Mercedes McLaren jigsaw. It’s called the SLR Stirling Moss and compared to its forebears, the styling is turned right up to 11.

The clearest difference compared to more sedate SLRs is the blatant lack of a roof or any windows – inch-high wind deflectors are the only concession to keeping driver and passenger’s faces intact. It is said to be inspired by the 1955 300 SLR that Moss guided to the Mille Miglia record of ten hours, seven minutes and 48 seconds.

Power comes courtesy of the supercharged 5.4-litre V8 from the SLR 722 edition, meaning there’s 641bhp and 605lb ft on tap, taking the speedster to 62mph in sub-3.5sec and onto 217mph. We’d advise a helmet if you’re hoofing it that much, though.

The performance is a level above that of the rest of the McMerc range thanks to some handy weight-loss techniques – losing all that glass, for one, and a light carbonfibre body – as well as a closed underbody and a rear diffuser that’s bigger than that of previous SLRs. 200kg has been shaved from the SLR coupe.

Owners will be able to handily compare the two, as the 75 Stirling Moss editions are available solely to current SLR owners. Such loyal customers are perhaps the only people able (or willing) to stump up the 750,000 euros for another, distinctly less practical one.

It rounds off production of the SLR – the best selling hypercar ever, at 1700 units – although that is short of the 3000 cars initially planned. It also signals the end of the McMerc supercar partnership – the Germans going their own way with the SLC and McLaren making its first independent car since the legendary F1 in the shape of the P11.

Click to scroll the rest of the Detroit motor show.