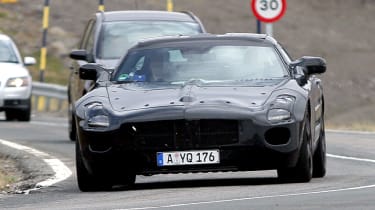 The 'Mercedes Gullwing' has often been referred to as the SLC, but we’re expecting the production version to have a new name and quite possible be under the AMG brand. While the details are sparse, the bright silver paddle shifter has been spotted by our spy directly behind the steering wheel. Whether this supercar will have 6, 7 or maybe even 8 gears is still unknown. We can see a strip of LED, daytime running lights along the bottom of the headlight clusters. There also seem to be additional LEDs in the top section of the headlight cluster. Other details which pop out are the large cross-drilled, slotted rotors. Those large rotors will be stopping a set of Pirelli tires.

The Gullwing is expected to be introduced at the 2010 Geneva Motor Show, with a limited run of sales for a period of two years. Production numbers will likely be around 6,000 units a year and should carry a price tag of several hundred thousand dollars. We’re hearing horsepower estimates in the 550-650 range, with power expected to come from a forced-induction V8, or maybe even a V10.