Small car, big engine, huge performance… and simply one of the best Astons ever 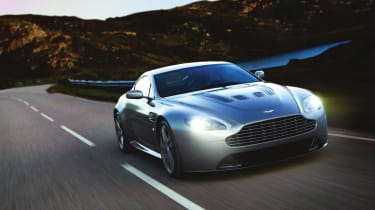 With the 5.9-litre V12 engine from the DB9 and DBS squeezed into the compact Vantage bodyshell, the engineers at Gaydon created a truly wonderful car. It seemed almost absurd that a body so small should be packing over 500bhp. But the V12V quickly went from fantasy to production reality, distinguished from regular Vantages by bonnet vents to help cool that giant engine. And a quick look at the tread pattern of the tyres and the aerodynamic tweaks lifted straight from the N24 race programme showed that this wasn’t just intended to be some straight-line monster.

Power delivery was smooth, the gearchange slick and the ride unexpectedly supple. Obviously, with all the weight of the engine up front (the V12 is 100kg heavier than the 4.7-litre V8), the ride was still firm – but not nearly as firm as that of a rival like the Porsche 911 GT2. Hit the Sport button, located in front of the gearlever, and the throttle response became even sharper and the bellowing from the exhausts still louder by opening the baffles.

Aston struck gold with the Vantage V12. In a way it’s the car we always hoped the V8 would be, with a decent ride, proper performance and engaging handling. When you add this to classic Aston lines, it’s a dream ticket. After driving it in company with an Audi R8 V10, Corvette ZR1 and Porsche 911 GT3, evo’s John Barker remarked: ‘This is clearly the best Aston the company has ever made for people like us.’ Finally, Ulrich Bez had fulfilled his ambition of building an Aston Martin that could go toe-to-toe with the best from Porsche.

That’s been borne out by the following the V12V enjoys among hardcore Aston fans, reflected in unusually strong residuals on the secondhand market. A modern classic if ever there was.