We've given the McLaren MP4-12C its toughest challenge yet: meeting the Ferrari 458 Italia, Noble M600 and Porsche 911 Turbo S. 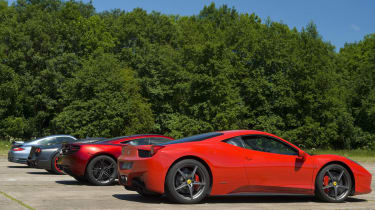 It’s the toughest test the McLaren MP4-12C has faced so far – going head-to-head with three of its toughest rivals, the Ferrari 458 Italia, Noble M600 and Porsche 911 Turbo S.

You can read the full story of our definitive test in issue 159 of evo, on sale now. But, because we’re feeling exceptionally generous, we’ve also brought you a package of video exclusives.

First up, we find out which of these cars is the quickest in a straight line with a good, old-fashioned drag race...

Next we introduce some corners to the mix with three exclusive videos from the Bedford Autodrome as the McLaren, Ferrari and Noble put in their timed laps with Roger Green at the wheel.

Next the Ferrari 458 Italia:

And finally the Noble M600: