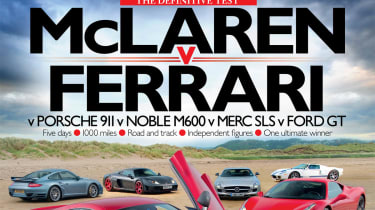 Buy a copy of evo 159 in our online shop

NewsWe’re off to the Bonneville salt flats, with Dickie Meaden aiming for some records. In a Skoda…

LettersChris Harris strikes a chord with one reader – and annoys another

Mille Miglia specialIt’s one of the world’s most iconic road races, and while it’s no longer against the clock, legendary racing cars vie to take part every year. Henry Catchpole sets off in pursuit in the brilliant new Jaguar XKR-S, while Harry Metcalfe joins the party in his Ferrari 550 BarchettaOn the cover: McLaren MP4-12C, the definitive testMcLaren’s MP4-12C squares up to Ferrari’s 458 Italia, reigniting a road car rivalry that’s been dormant for years.  911 Turbo S, SLS AMG and Noble M600 join them on our favourite roads for the definitive test. And we’ve introduced a wild card: a former evo Car of the Year, the fabulous Ford GT. Let battle commence…

Lotus Elise Club Racer v Caterham 7 SupersportThe sun has got its hat firmly on at the moment, so Roger Green takes the opportunity to top up his tan in a brace of new British sports cars with added lightnessWe race the new Aston ZagatoHalf the office seems to be racing at the Nürburgring 24 hours this month, but only one of us, a very lucky Richard Meaden, is doing it in a Kermit-green Zagatoed V12 Vantage. Here’s the build-upLong-term testsWe ease the pain of losing our Megane 250 Cup by welcoming in a Ferrari 458 Italia and a Mercedes SLS AMG. We’ve also got a Mini Countryman, the keys for which have landed on the desk of our newest staff member. Well, he wasn’t here to argue at the time…BMW M6 buying guideA 500bhp BMW M6 for the price of a 200bhp VW Scirocco? Too good to be true? Here’s how to avoid getting your fingers burned

The KnowledgeUnsure of the MG ZS 180’s kerb weight? Flick to our data section sharpish before you embarrass yourself in casual conversation

Ask the ExpertsOur panel of geniuses explain the benefits of run-flat tyres, how to modify a Porsche GT3 and what you should replace your stolen car withMe and My Car His everyday car is a Golf, but we’re more interested in his other vehicle, the one with the projected 1000mph top speed. Yep, it’s Wing Commander Andy Green

Buy a copy of evo 159 in our online shop