Peugeot has shown the 308 R concept at the Frankfurt motor show. The mid-sized hatch gets 270bhp and a lightweight body. Specs, pictures and details here 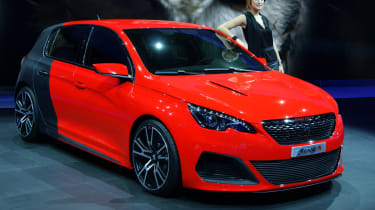 Peugeot has unveiled the extreme new 270bhp 308 R concept car at the Frankfurt motor show, which hints at a sporty new hot hatch to sit above the 208 GTI.

To help with weight loss, the concept features carbon fibre doors, front wings and sills. In fact every panel other than the roof and tailgate has been changed for the 308 R. The front bumper is also unique, with massive air intakes, and at the rear, the bumper houses twin-exit exhaust pipes. Despite releasing these details, Peugeot hasn't confirmed a weight for the 308 R.

The body is wider than standard, due to the 30mm widened track, and the car’s stance has been radically changed thanks to a 26mm reduction in ride height and standard 19-inch wheels.

Sharing its engine with the RCZ R, which has been confirmed for production, the 308 R concept would also boast a 167bhp/litre specific output. The engine is actually a development of the 197bhp 1.6 turbocharged unit, used in the RCZ THP 200 and the Citroen DS3 Racing.

Peugeot has utilised a Torsen mechanical limited slip differential, and 235/35 R19 tyres to try and get the power down. There is also an uprated braking system, with four-pot callipers, 380mm Alcon discs at the front and 330mm at the rear.

Although not yet confirmed, a production version of the 308 R would directly rival current hot hatches like the Renault Megane 265, Ford Focus ST and VW Golf GTI, although if it goes into production, could be fighting the next generation Honda Civic Type-R.