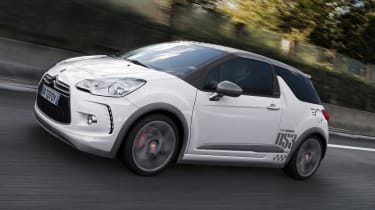 What is it?A new 204bhp version of the DS3 hatchback engineered by Citroen Racing (the same people that make Sébastien Loeb’s rather successful WRC cars). It’s available in Obsidian Black with Sport Orange or Polar White with Carbon Grey and has lashings of carbonfibre inside and out. It's on sale now and costs £23,100, though numbers are limited. Technical highlights?The front and rear tracks have been widened by 30mm and the body height has been lowered by 15mm. The front brake discs are now 323mm in diameter and they’re clamped by four piston Brembo calipers. The ESP can now also be totally switched off and the 18in wheels feature ‘Reverse Rim’ technology, which makes them look more like 19in rims and improves weight distribution. What’s it like to drive?It’s a very agile chassis underneath the DS3 R and it’s a very chuckable car as it corners flat and switches direction really quickly. This allows you to string together fast and medium speed corners really enjoyably. However, although the steering isn’t bad for an electric system, it still feels too light in slower speed corners and fails to feed back enough information about what the front tyres are doing. In the wet conditions we drove it in, it was always the front end that would give up its grip first too, unless you really trail-braked heavily into corners.

It’s a good job that you can turn the ESP off fully because although 204bhp isn’t much in a hot hatch these days (and it doesn’t seem to have the vim of the same engine in the Mini – partly due to gearing, I suspect) the front tyres struggled to really lay the power down cleanly.

So, it’s a good car, but not a great one and I’ll be interested to see how it copes on the considerably bumpier roads of the UK…  How does it compare?At £23,100 it is significantly more expensive than the similarly sized and powered Renaultsport Clio 200 (and not as good to drive), however, I suspect more people will consider it as an alternative to a Mini John Cooper Works. The DS3 R and Mini are much more closely matched on price and I suspect they will be dynamically closer too, although I would probably narrowly back the Mini to win the encounter. We will see. Anything else I need to know?The graphics that you can see on the cars in the photos are an option (and a £450 option at that), and we'd order it in the white colour scheme as it looks a lot better. Oh, and the CO2 emissions are a staggeringly good 149g/km. That means £125 annual tax compared to the Clio 200's £235.