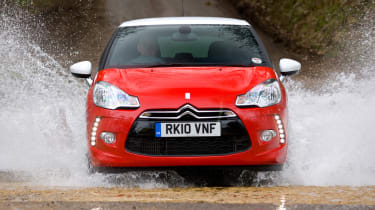 What is it? Citroen’s funky DS3 small car (and arch Mini Cooper rival) in diesel form. This is the DSport 1.6 HDI 110, which costs £15,900. Technical highlights The engine combines strong low-rev performance – 110bhp at 3600rpm and 199lb ft at 2000rpm, enough for a sub-10.0sec 0-60mph time – with a claimed 62.8mpg (combined cycle) and 118g/km of CO2 emissions, which sees annual road tax costing just £20. The rest of the car is the usual DS3 DSport fare, which is to say there’s plenty of kit inside, with a cracking six-speaker MP3 and aux-compatible stereo as standard and a neat sat-nav/phone/entertainment setup on the options list. What’s it like to drive? Good fun, and not too dissimilar to the turbocharged petrol DS3 (tested here against its key rivals). So it’s a softer and less agile alternative to hot Clios and Mini Coopers, but it’s very well balanced, and while light steering, gearchanges and pedals don’t suggest an intoxicating driving experience, they all match each other perfectly and allow you and the DS3 to flow smoothly and very briskly along twisty roads. The diesel engine does add weight to the front of the car, with understeer more evident as a result, but it makes up for this with useful amounts of low-down grunt, so you drive the diesel DS3 in a slightly different manner to its petrol sibling. In fact there’s a shedload of torque available nigh on instantly, though it wanes quicker than you’d like, so you’ll change gear a lot more than in the petrol DS3 1.6 THP. How does it compare? The DS3’s a pretty compelling package, and with lots of space inside, plenty of kit and attractive styling (plus endless customisation options, some illustrated on the right), it’s easy to see why it’s selling so well.  A similarly powered Mini Cooper D boasts better dynamics and costs less money (£15,160/110bhp/177lb ft), though it will be pricier than the DS3 once you’ve ticked the usual options boxes, while a Ford Fiesta Zetec 1.6 TDCi (£14,345/94bhp/150lb ft) is much more commonplace and conventional but is also sharper to drive. Anything else I need to know? Sacrifice 20bhp, 30lb ft of torque and a sixth gear and you get the DS3 1.6 HDI 99g, a tax-free, low-emission Citroen that also returns a claimed 74.3mpg (combined). It’s got less equipment, but then it is over two grand cheaper at £13,700. We’ll get our hands on one to review soon.