We review the new drop-top Citroen DS3 Cabriolet in 154bhp DSport form. Can it rival the Mini Convertible and Fiat 500C? 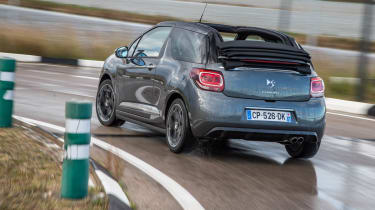 The roof, of course. Similar to its Fiat rival, it’s not a full convertible, rather a soft-top roof that rolls from the top of the windscreen back to the boot, the DS3’s core structure remaining intact. Product chiefs tell us this is so the DS3’s key design features – the 'floating' roof, the shark-fin B-pillar – aren’t lost, but there are other benefits, namely in development cost, structural stiffness and weight.

The DS3 Cabriolet is 25kg heavier than its hatchback equivalent, with a strut brace and some ballast at the rear the only additional changes beyond the roof itself. The underpinnings remain the same and the DS3’s five-seat layout is unchanged (bootspace dropping 40 litres to 245), while the roof can be opened or closed in 16sec and at up to 75mph – perfect for when the rain starts lashing down halfway round the M25.What’s it like to drive?

Unsurprisingly, just like the regular Citroen DS3. It’s a softer, more relaxing car to drive than a firmly sprung Mini thanks to its long suspension travel, though rougher urban roads and more severe potholes still unsettle it. While the steering lacks any real feedback, it’s reactive enough, and the DS3 can be driven keenly with relative ease. Push harder and understeer soon prevails – with an oddly disconnected feeling from the steering during initial turn-in – but the buyers this car is aimed at are unlikely to encounter these traits too often.

By eschewing a fully convertible roof, the Citroen avoids any notable shake or shimmy. Wind noise is minor with the roof up, and with it down, buffeting isn’t too bad up to 80mph, a standard pop-up wind deflector at the top of the windscreen ensuring conversation volumes can remain constant. Black marks are for the next-to-zero rear visibility with the roof all the way back (though parking sensors are standard) and poorer noise insulation than the hatchback when the roof is closed.

The THP 156 petrol engine remains a high point, the 154bhp 1.6-litre turbo – closely related to engines in the Mini Cooper S and Peugeot RCZ – punchy low down yet eager to rev, and mixing very good real-world pace with a claimed 47mpg.How does it compare?

The nature of this market segment means most decisions will be made on style grounds and personal opinions; for comparison, a 158bhp Fiat 500C Abarth 595 costs £19,625 and a 181bhp Mini Cooper S Convertible weighs in at £20,590. The DS3 Cabriolet is more practical and refined than both.

The boot opens in a trick fashion (see pictures, right) that makes a good first impression, but creates a very small aperture that anyone taller than five feet will be crouching to use.

Other engine options in the UK are 81bhp 1.2-litre three-cylinder and 118bhp 1.6-litre four-cylinder petrols. And a DS3 Racing Cabriolet seems quite likely too, using the same 204bhp 1.6-litre turbo engine as the hot hatchback. That’s as potent the road-going DS3 will ever be, we’re told. 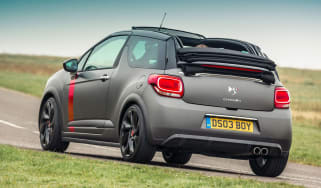 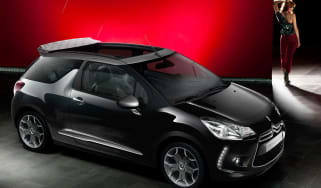 Citroen has released images of the new DS3 Cabrio, ahead of its Paris motor show launch.
Skip to HeaderSkip to Content