Citroen has released images of the new DS3 Cabrio, ahead of its Paris motor show launch. 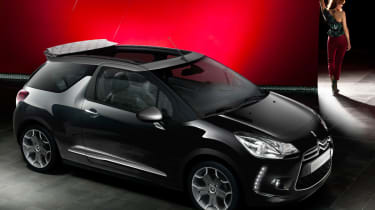 Citroen has released images and details of the new DS3 Cabrio, a soft-top version of Citroen's premium hatchback. The new model, which allows the roof to be opened and closed at speeds of up to 75mph, will be making it's public debut at the Paris motor show on 29 September.

Citroen claims to have maintained passenger space, meaning the DS3 is a true five-seater cabriolet. Boot space has been reduced, but is still the largest in its class. Aerodynamics are said to be totally unaffected by the new roof.

The DS3 Cabrio uses a fabric roof, similar in style to the Fiat 500C, which can be opened electronically to three positions, intermediate, horizontal and total - taking just 16 seconds to open or close fully.

There are seven colours to choose from, with the folding roof available in three designs - black, Infinite blue and DS Monogramme. It will also be the first model to see the introductions of Citroen's new 3D-effect LED rear lights - first previewed on the Revolte and Survolt concepts. UK specification and prices will be announced at the Paris motor show.