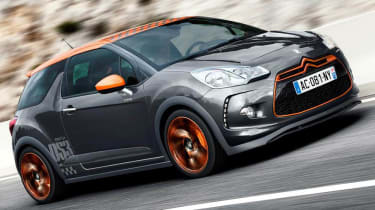 What is it? Citroen's DS3 Racing is the hardcore version of the DS3 THP 156, the turbocharged DS3 that is the quickest and most engaging in the DS3 range of warm-to-hottish hatchbacks. Engine power rises to a round 200PS, or 197bhp in old money, with suspension, steering, brakes and wheels toughened up to suit. It's the creation of Citroën Racing, the competition department behind the somewhat successful Citroen World Rally cars. It appeared at this year's Geneva show as a 'concept' car.  Technical highlights The engine gains strengthened components, a re-map which includes more boost pressure, and a freer-flowing exhaust system. It's not the latest variable-valve-lift version of the engine now used in turbocharged Minis but a development of the earlier unit. Citroen is getting it certified as a low-volume car which avoids costly legal tests but limits it to 1000 units. Cleverly, it will also make another version with fractionally different engine calibration which will allow another 1000 cars. The two will feel almost exactly the same to drive. Springs and dampers are stiffened, more so at the back, and the ride height drops by 15mm. Front and rear tracks are 30mm wider, thanks to greater offset in the 18in wheels. The dampers are specially-developed, in-house Peugeot-Citroen items, and the larger front brakes get four-pot calipers. What’s it like to drive? Evo drove a late development DS3 Racing on a twisting, undulating test track and the signs are promising. The engine note isn't as hard-edged as a Cooper JCW's but there's almost no turbo lag and the 203lb ft of torque gives great punch out of corners. The stiffened tail helps point the nose keenly into corners and there's plenty of scope for more line-tightening if you back off the power. Citroën has resisted the temptation to give the DS3 R (as people will surely call it) a rock-hard ride, so it should work well on lumpy UK roads. What it lacks is total crispness around the steering's straight-ahead position. 'It's a problem with electric power steering,' says engineer Pierre Budar, 'but we are trying to make it better.' The ESP can be switched off completely. Unusually deep side bolsters help the seats to give plenty of lateral support, but the bright orange dashboard is a bit distracting. It goes with the roof colour, the wheels and the 'orange chrome' that surrounds the front grille, but there will also be a white body/grey roof combination if you favour a calmer DS3 R. The stickers won't be obligatory. How does it compare? It's softer-edged than a Clio Cup, in steering precision, throttle response (the Clio has no turbo) and ride quality, but it should devour roads just as quickly and you'll probably feel calmer by the drive's end. Similarly, it will probably be easier to live with than a Cooper JCW, being just as rapid and rather more fluent in its feel. It's a hot hatch designed to grow on you rather than knock your socks off on a test drive.  Anything else I need to know? Expect a price around £19,000, with sales starting in the autumn. The cars won't be numbered, despite the '000' plaque on the concept car, but that carbonfibre on the wheelarches and in the cabin is real.