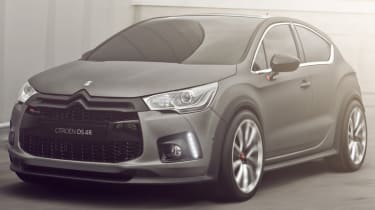 The Citroen DS4 Racing’s future hangs in the balance. A concept for the 256bhp hot hatchback was shown at the 2012 Geneva motor show, with the high-rise DS4 hatchback gaining a wound-up version of the company’s 1.6-litre turbocharged petrol engine. Its power output sat it right amongst 2-litre turbo rivals such as the Ford Focus ST, Renaultsport Megane and VW Golf R, the Citroen boasting a dose of WRC kudos to help it battle such prestigious hot hatch heritages.

A year later, though, the project could be canned, with a decision on production still unmade. Citroen product chief Joel Maynadier said ‘the DS4 Racing is in a very hard part of the market, and it needs to be viable’. While the same engine with similar potency is set to power the Peugeot RCZ R, this doesn’t appear to help the hot DS4’s case. ‘The Peugeot is a sporty coupe. The same engine isn’t as natural in a car like the DS4’ Maynadier added.

The same engine puts out 204bhp in the smaller DS3 Racing, and a more potent version of that has been ruled out. ‘For more power we would need to work more heavily on this car, it would need wider tracks and so the whole thing would have to be wider. That’s not the direction we want to take DS3 in’.

A DS3 Racing Cabriolet seems likely though; while Maynadier wouldn’t confirm its existence, a number of limited run specials are due in the DS3 drop-top range, and with the cabrio’s weight, structure and aerodynamics barely changed compared to the hatchback, a Racing version wouldn’t be the compromise it might appear. Such a model would likely be made in limited numbers like the DS3 Racing hatchback (which had an initial 1000-off run but was later extended past 2000), with a price tag of around £25,000.