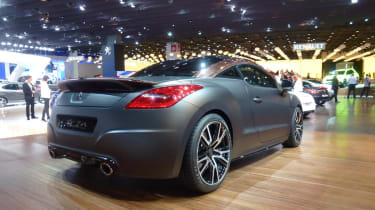 Peugeot has pulled the wraps off its most powerful car yet at the 2012 Paris motor show, and it could herald a new range of performance Pugs. Officially a concept, but a production certainty in 2013, the RCZ R boasts a 256bhp output – 59bhp more than the standard RCZ coupe.

That’s despite it also using a 1.6-litre turbocharged four-cylinder engine; like the similarly potent Citroen DS4 Racing concept from earlier in the year, the RCZ R gets a seriously wound up engine with development input from its motorsport arm.

Helping the front-drive RCZ successfully manage that power will be tweaked suspension and a Torsen limited-slip differential, while the ride will be lower, track widths wider and brakes bigger.

Despite its wealth of upgrades though, RCZ product manager Philippe Houy was most keen to discuss its combination of performance and cleanliness. The aim is for CO2 emissions to sit below 155g/km, while fuel consumption will be similarly low. ‘A very high level of power with low consumption is the main aim, with no compromise in either. It’s a halo model for our range, a dream car for the present day’, Houy told us.

He also hinted at R becoming a Peugeot performance brand that sits above GTI, and the 208 could be next to get the R treatment. It would be more powerful and more aggressive looking than the 197bhp 208 GTI which was also on the Paris show stand. That sat alongside the madcap 208 R5 rally concept, which could provide a big hint at the look of a Peugeot 208 R.