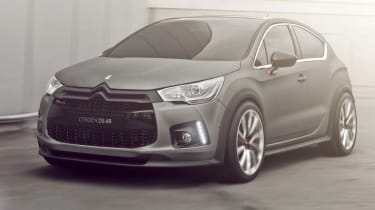 Citroen is once again making use of the team behind the hugely successful WRC effort - Citroen Racing - to expand the company's performance portfolio. The DS4 Racing concept, to be officially unveilled at the Geneva motor show, will use a version of the PSA/BMW 1.6-litre THP turbo engine, which has been boosted to 256bhp.

With a specific output of 160bhp per litre, this could Citroen's most powerful road car ever produced, squeezing 50bhp more out of the engine than Mini have managed with the Cooper JCW. Although the THP engine is incredibly potent for its size, Citroen says it emits just 155 g/km of CO2, even in this state of tune.

The suspension has been substantially uprated to deal with the power hike - a 35mm drop all-round - and a wider front and rear track. These changes complement the 19-inch wheels that are fitted to the concept, housing the huge 380mm brake discs and four-pot callipers.

To complete the package, Citroen has given the DS4 a whole new look with deeper bumpers - finished off with a textured-effect matt grey paint job and two-tone roof.