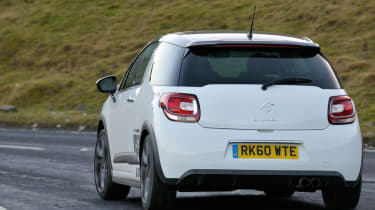 Citroën and Sébastien Loeb have dominated the World Rally Championship for what feels like a small eternity. Ford has pluckily taken the fight to them (with a much smaller budget) but mostly fallen short. Nonetheless it is the Blue Oval’s road cars that have capitalised on the WRC link, specifically with ST and RS versions of the Focus. Citroën, meanwhile, hasn’t even bothered to produce a properly sporty version of its production C4 (if anyone mentions the C4 ‘by Loeb’ special edition at this point, please leave the room). All very bizarre.

Now, however, before the new DS3 WRC has even turned a competitive wheel, we have the DS3 Racing. It is the first road car ever to be developed by Citroën Racing (the same group of people that make Loeb’s daily driver) and it looks absolutely fantastic. There are two colour schemes: you will probably by now be familiar with the Obsidian Black/Sport Orange combo that is in most of the pictures here, but I actually think the alternative Polar White/Carbon Grey choice is by far the better one. The reason (apart from the fact that the black and orange looks like it belongs on a 16-year-old’s motor scooter) is that the white shows off all the beautiful real carbonfibre that Citroën has dressed the Racing with.

The arch extensions, front splitter, rear diffuser, rubbing strips and various other bits are all made of the black weave with a slightly matt finish. Inside it’s more of the same, with part of the steering wheel, chunks of door trim and the entire centre console sculpted out of carbon. It might sound potentially tacky but it actually looks really good. The bucket seats are designed by Citroën Racing too and look great. However, the air freshener in the dashboard looks more out of place than ever.

Underneath all the carbonfibre and optional decals (£410), the Racing has 30mm wider tracks front and rear and sits 15mm lower than the standard DS3 on new 18in wheels. The front brake discs have grown to 323mm in diameter (up by 40mm) and are now clamped by four-piston Brembo calipers.

The engine is the same 1.6-litre turbocharged bundle found in the Mini Cooper S but in the DS3 Racing it is tuned to a JCW-rivalling 204bhp and 203lb ft, which should see it sprint from standstill to 62mph in 6.5sec before going on to reach 146mph flat-out. Arguably even more impressive than those performance figures, however, is the CO2 rating of 149g/km and combined cycle figure of 44mpg.

See the Citroen DS3 Racing v its rivals on video

Not that we will be replicating the latter today, because the launch for the DS3 Racing is taking place in the hills above Nice, which means the amazing Col de Vence is our playground. The crinkle-free tarmac is damp today and as we climb ever higher we plunge into cotton-wool mist. Evidence of the road being used as a (probably not entirely legal) rally stage looms in the foglights with lines rubber-tattooed onto the tarmac in the braking zone for each corner. The Citroën is agile and accurate in its lines but the first thing I do is turn the ESP off (and it is completely off in the Racing) because the front wheels are struggling to lay down the power cleanly and the electronics are cutting in early rather than allowing a bit of slip.

Despite the traction issues, the engine doesn’t feel like it’s imbued with quite as much vim and eagerness as in the 208bhp Mini JCW, partly, I suspect, due to taller gearing in the DS3. It’s in the corners, not on the short straights, that we’re really hoping for good things, however. The DS3 Racing changes direction quickly and incisively and corners very flat, so you can link medium and fast corners together in really satisfying style, picking up clipping points and really flowing down a road.

However, in slower corners the electric power steering is too light and the front end just doesn’t feel like it’s keyed into the tarmac as you want. It feels like it needs a limited-slip diff. The Brembos are excellent, though, and on these smooth roads you can augment the front-end grip by trail-braking late and deep into corners, standing the car on its nose and getting the tail swinging controllably and entertainingly out of line. This isn’t something you would often do on the bumpier roads of the UK, but it could be interesting on track (we look forward to finding out).

The gearshift is light and slick but I’d like just a bit more mechanical resistance to make you feel more involved. It’s the same story with the pedals, but the handbrake (there were hairpins – I couldn’t resist) is everything you would hope for from a rally outfit, acting like a light- switch to snap the tail round. By the end of our few hours on the Col, the DS3 Racing had felt good, but never great. I love the lateral grip and stability of the chassis in direction changes but the front end needs to find more purchase and the steering needs more weight and feel.

If you look purely at power, then the DS3 Racing has Renault’s Clio 200 as a competitor, but in terms of price and dynamics, the Clio wins hands down. With the Citroën costing £23,100 – over six grand more than the Cup-chassis’d Clio – the more obvious rival for it is the £21,875 Mini JCW. Both have aesthetics that have been worked on hard, but each has quite a different flavour to its driving experience. It will be interesting to see whether it’s Citroën or Mini that comes out on top when they go head-to-head on the road, and on the WRC stages, in 2011.

See the Citroen DS3 Racing v its rivals on video