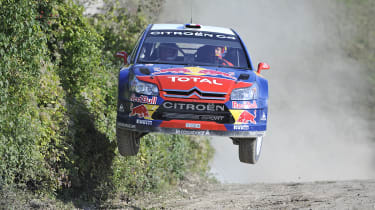 Three people have dominated motorsport in the ten years since evo first nestled on a WH Smith’s shelf. Michael Schumacher has won half the F1 drivers’ titles during that time. Valentino Rossi has claimed six motorcycle world championships in the same period. And Sébastien Loeb has taken home the last four World Rally Championship drivers’ trophies.

Now, you can’t squeeze into a Formula 1 car with Michael Schumacher’s chin and you can’t get on the non-existent pillion seat of Rossi’s MotoGP bike. Even if you could, you’d know that you were horribly affecting the weight distribution and consequently the way they drive/ride. But rally cars are different. From day one they are designed to have another person on board, and today I’m realising a dream on the scale of six numbers coming up: I’m taking the place of Daniel Elena in Sébastien Loeb’s Citroën C4 WRC car.

It’s probably not a Cilla Black-sized surprise to discover that my dream drive is to do with rallying. I love all forms of motorsport, but the sight and sound of a car sideways, exploding with anti-lag in the middle of a freezing-cold pine forest, has always excited me more than any other. This year I’m lucky enough to be driving in the British Rally Championship as part of the Suzuki Swift Sport Cup, but fairly obviously I’m still somewhere in the foothills (in the car park, near the café and souvenir shop) of my own personal learning curve. So I wanted to see just how far away from the peak of the sport I really am. It will probably crush me when I see the true gulf between our relative talents, but right now I’m more excited about this than I have been about just about anything else since I joined evo.

It also seems only appropriate that my dream ‘drive’ should in fact be a passenger ride. When I first arrived at evo I was barely out of nappies, and as such many of the cars were firmly on the insurer’s ‘look but don’t touch’ list. Consequently, I became the tall, gangly office sack of spuds – we do all of our performance figuring and lapping two-up, and this meant I got into some very good passenger seats.

Being ballast is not a terribly difficult job, you’ve just got to keep an eye on the timing equipment, keep out of the way (difficult in a Brooke) and keep your lunch down. If you can cope with all that then the passenger seat is a fantastic place to be. You see all the varying styles, lines and even mistakes of drivers, storing them up for when your chance behind the wheel arrives. I eventually got so used to it that towards the end of a day’s lapping I would catch myself thinking about what sort of sauce I was going to have with my pasta that evening, despite the fact that John or Dickie might be wrestling to contain fourth-gear oversteer though the Palmer Curves.

It’s not everyone’s cup of tea, of course, and there were scary moments: a 997 Carrera S getting the wobbles at 170mph round the bowl at Millbrook; spinning in a Koenigsegg CCX through the fast last corner of the Bedford Autodrome’s West Circuit; a Z4 M double-snapping sideways at Hohe Acht on an icy Nürburgring; ESP, ABS, DSC and every other electronic aid disabling itself as we went for a 100mph brake test. All good fun in a helpless, life-in-someone-else’s-hands sort of way…

And now I’ve got the ultimate passenger ride. We’re late when we arrive at the private test facility north-west of Paris. The big red trucks of the Citroën WRC team are parked up and an army of dusty mechanics are fettling. A few other journalists from around Europe have been invited too, and every so often the Red Bull-liveried C4 disappears out of sight over a hill in a cloud of fine beige dust. Sébastien only gets out of the car once in the entire time I’m there, and I (quite bravely, I think) manage to drag him away from the PR girls he’s talking to and get a photo standing next to him. He is tiny. His website says that he is 5ft 7in tall, but he seems even smaller. He’s hot and has clearly been driving hard, but he’s also relaxed and still smiles – as much with those narrow, almost cat-like eyes as his mouth. He is very cool. Even if he wasn’t a WRC driver, even if he was just a 34-year-old electrician (as he trained to be) living in Haguenau then you know that he’d still be cool. So then, cool and tiny.

There’s no chance to talk to him before he’s got his helmet on again and is jumping back into the car. Another hour passes. I have a nose around the back of the trucks, marvel at how beaten-up the tyres coming off the car are (wonderfully warm but with the deep-gravel tread blocks ripped to shreds). There’s a good chance we’ll miss our flight back to Heathrow, but frankly I’ll walk back if I have to. I go and put a Citroën-branded race suit on (I had thought it would be fun to wear my Suzuki overalls, but Citroën doesn’t agree).

A chuntering dust cloud approaches. Downshift, handbrake, up on the ramps, engine off. Doors open. A journalist clambers out looking bewildered. An engineer points at me. The seat is low and my feet are surrounded by radio equipment. Do the belts up tight, then tighten them a bit more. Brrrrr-squeak-pip and the intercom’s plugged in.

He’s got to be impressed with that surely? His English is better than my French though, and whilst the mechanics run around the car I quickly try to explain that I’m doing the British Rally Championship. I don’t do this because I feebly think it might impress him but simply because I desperately want him to scare the hell out of me. My worst nightmare is that he will hold back, assuming that a seven-tenths effort will be enough for a poxy journalist.

I also rather selfishly ask him if he can give me any advice on gravel driving.

‘I think with the… errr… Suzuki you need to keep it very neat,’ says Séb, gloved hands demonstrating small movements of a steering wheel. ‘You don’t want it sliding too much because you haven’t got the power to pull it out. Maybe it will help if you watch what I do?’

The surface is loose, chalky and rutted. I can’t see much as we approach the stage because, despite being taller than Daniel, I’m still eyeballing the dashboard. Then BAM! The torque hits home as Loeb nails the throttle and a relentless stream of upshifts surges us towards a two-left-plus. It feels like your body is constantly being thrown then squeezed violently left or right, backwards or forwards. The track suddenly disappears in front of us and dives steeply downhill. It feels like we’re free-falling, but Loeb is accelerating too, helping gravity. The compression at the bottom slams my neck into my shoulders; Loeb dabs the brakes with his left foot to flick the car into the next corner. I watch his feet, which are constantly busy, one on each pedal, never hesitating, just pressing with a ruthless deftness.

Unfortunately it’s as I’m looking down that we hit the jump for the first time. The picture you’ve already seen says it all really, but inside the car it felt three times as high again. I had no idea it was coming and, by the time I look up, my stomach is somewhere near my ankles. As we hit the ground, the car shrugs off the landing and my spine compresses. Loeb is instantly braking for a left which tightens into a hairpin. A brief tweak of the handbrake and we’re on to a short straight leading to a deeply rutted and very long right-hander.

I glance across at Loeb and he is definitely trying. His work-rate behind the wheel is phenomenal and the concentration is absolute, the eyes unwavering from their constantly moving target up ahead. The intensity never eases, there is no breather. The most amazing thing is that he is on the throttle so early and so much more than you would think possible.

As we come round for the second lap of the stage I try to watch a little bit more objectively, but it’s not easy. He’s immensely aggressive with his lines in the corners, cutting and clambering all over the inside. He’s never out of shape; the car slides, and it’s occasionally provoked to get the tail round (particularly through the deeply rutted right-hander), but it never feels like you’re in an extravagant or wasteful slide. Tensing up and bracing myself doesn’t make the jump any more comfortable or less astounding the second time.

And then, all too soon, it’s over. And we’re driving back towards the red trucks. And I’m out of the car. And there’s the wonderful release of pressure as I take the helmet off. And I’m smiling the most enormous smile. Something to aim for! Something I’ll definitely still be talking about in another ten years.

It’s 2006 and it’s eCoty. The car is a pastel blue 997 GT3. I fell in love with it that morning. If I won the Lottery I’d walk straight out and buy one. So I’m nearly in heaven right now, but I’m just a little frustrated, and also slightly anxious. ‘Slower or faster?’ is the question on my mind. Slower perhaps; he is The Law after all. But something’s telling me to ignore the fact that l’homme en bleu could handcuff me and throw me into the south of France’s equivalent of the Bastille as soon as we stop.

Sod it. Hairpin, first gear, sideways through to the exit, Alcantara rim running through my hands. I’m happy. I glance nervously to my right as we head up the subsequent straight. The small man beams at me, eyes alight, a double thumbs-up. Language barrier breached, tone set. Unforgettable. Henry Catchpole