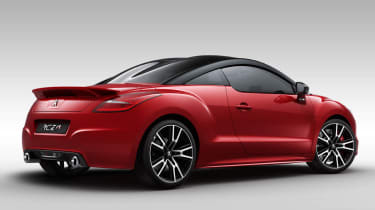 The Peugeot RCZ R will make its world debut at this weekend’s Goodwood Festival of Speed. The car goes straight to the top of the RCZ range while also gaining the honour of being the most powerful road car in Peugeot’s history.

That’s thanks to its 1.6-litre turbocharged four-cylinder engine, which produces 266bhp at 6000rpm and 243lb ft at 1900rpm. Its THP engine is a development of that seen in the 197bhp RCZ THP 200 and the Citroen DS3 Racing, though many of its parts have been heavily redeveloped to catalyse such a big increase in power. A new steel exhaust manifold ensures it can operate at higher temperatures, too.

With a Torsen differential to help transmit the gamut of power through the front wheels, the RCZ R will complete 0-62mph in 5.9sec on its way to an electronically limited 155mph top speed. Peugeot is keen to boast that the RCZ R – whose 167bhp/litre specific output is higher than a Ferrari 458 Italia’s – also achieves 145g/km of CO2 emissions and 44.8mpg fuel economy.

Not only is the new car significantly more powerful than the RCZ THP 200, it is also lighter. A 17kg cut means the RCZ R will weigh it at 1404kg, benefiting its power-to-weight ratio further. New suspension settings include wider track widths and increased wheel camber angles, while there are new dampers and stiffer springs. The R also sits 10mm lower than other RCZs.  In terms of aesthetics, there’s a set of 19in alloy wheels, a matt black roof and a new aerodynamics package, which incorporates a fixed rear spoiler. Colour choices are black, grey, white and red. The sports exhaust gets chrome tailpipes as well as an ‘enhanced sound system’ to boost the noise it makes for those in the RCZ R’s interior.

Peugeot cites its long-term involvement in motorsport and a desire to create a more sporty model as the motivation behind the RCZ R, with a Peugeot 208 R rumoured to follow and sit above the 208 GTI in the coming years. But all the extra power means it faces stiff opposition from the VW Scirocco R and the Audi TTS. Both cars have been on sale for some time now but in terms of basic figures the Peugeot looks a strong newcomer.

Both use 2-litre turbocharged four-cylinder engines; the front-driven VW is 5bhp down (261bhp) while the Audi is 2bhp healthier (268bhp) and transmits its power through a four-wheel-drive Quattro drivetrain. The VW costs £31,735 and the Audi £35,905; the Peugeot RCZ R is expected to sit slap bang between them, with a £33-34,000 price tag forecast. That will make it around £10,000 pricier than the cheapest RCZ THP 200.

The Peugeot RCZ R makes its first appearance at the 2013 Goodwood Festival of Speed this coming weekend, with a ‘formal’ unveiling due at the Frankfurt motor show in September.