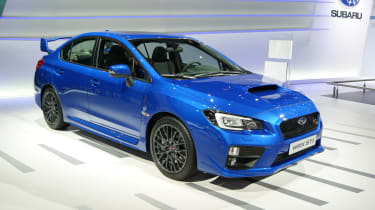 Subaru has released a video of rally legend Tommi Makinen driving the 2014 WRX STI. Makinen, who drove a Subaru in the WRC in 2002 and 2003, describes the car as 'wanting to go faster and faster'. The video shows the new WRX STI going flat out, and even taking off at one point.

International Motors, the UK importer, has confirmed that due to favourable movements in the exchange rates, the Subaru WRX STI will go on sale in May priced at £28,995.

Compared with the standard WRX, revealed at the 2013 LA auto show, the STI features a much more aggressive bodykit and a proper rally-inspired rear spoiler, just like the Imprezas of old. Larger 18in wheels also help to fill out the wheel arches. Spring and damper rates have been tweaked, and the hydraulic steering system gets a quicker ratio and stiffer rack.

While the engine and styling of the WRX STI are immediately familiar from its forebears, the interior has had a much thicker lick of paint, with a bigger overhaul necessary to compete with the slick cabins found in the VW Group hot hatchbacks the car’s price tag points it straight towards.

There’s a simpler dashboard layout, an electronic display between the speedometer and rev-counter and a new Harman/Kardon stereo, while the steering wheel gets an Audi-esque flat bottom.

As well as displaying the production road car at Geneva, Subaru also showed off a racing version which will compete in the Nurburgring 24-hour race in June. Called the WRX STI NBR Challenge 2014, it has a smaller 2-litre engine yet higher, 335bhp/340lb ft outputs. It will be driven in the round-the-clock motorsport event by Toshihiro Yoshida, Kota Sasaki, Carlo van Dam and Marcel Lasee.

While it was unveiled almost six months before Geneva, there’s no word yet on if the base WRX will make it to the UK. With a similarly upgraded interior and the introduction of torque vectoring, it’s as up-to-date as the STI, with a little less power at 268bhp.

Use of high tensile steel in the WRX’s body makes it stiffer yet lighter than ever, with both attributes benefitting the dynamics. Likewise a 25mm longer wheelbase than its predecessor (now measuring 2650mm), which also boosts rear legroom, while there are bigger door openings to improve access to the interior.