The Ferrari 458 Speciale, a modern day 430 Scuderia with nearly 600bhp, has been revealed at the Frankfurt motor show. Spec details, pictures and show video here 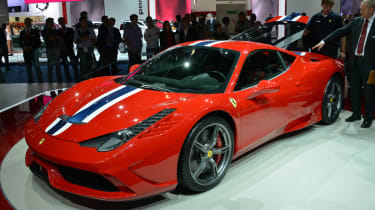 The Ferrari 458 Speciale has made its international debut at the 2013 Frankfurt motor show. The new model pioneers some interesting new active aerodynamic technology, and its 597bhp flat-plane crank V8 engine is the most extreme naturally-aspirated V8 engine ever made by Ferrari.

Following the path taken by the 360 Challenge Stradale and 430 Scuderia (not to mention the lesser-spotted 348 GT Competizione), it’s a harder, faster and stronger version of Ferrari’s V8, mid-engine supercar, in this case the 458 Italia.

Its central stripe (seen here running down that trademark Ferrari rosso paint) is an unsubtle nod to those iconic forebears. Initially rumoured to be called the 458 Monte Carlo, it has instead been called the Speciale.

The 458’s 4.5-litre V8 engine has been tuned from 562bhp to 597bhp, resulting in a specific output of 133bhp/litre, Ferrari claiming this as the highest ever achieved by a naturally aspirated road car engine. It helps edge closer to its arch rival – the 616bhp McLaren 12C – a car which uses twin turbochargers on its V8.

The 458 Speciale’s 1290kg dry weight is 90kg lighter than a standard 458 Italia’s, and endows it with a 470bhp/ton dry power-to-weight ratio. This figure surely aids its sensational performance; 0-60 takes less than three seconds, with 0-62mph completed in 3sec dead, 124mph hit in 9.1sec and a 1m23.5sec lap of Ferrari’s Fiorano test track 1.5sec quicker than standard, 0.5sec quicker than the 599 GTO and just 0.5sec slower than the 730bhp F12 Berlinetta. At 1.33g, Ferrari is claiming the highest lateral acceleration of any of its road cars.

It’s not just more power and less weight, though, with new aerodynamic elements. The front grille treatment has changed, there’s a more sculptured front bonnet, with more ventilation, and the rear is more racecar-like with a bigger diffuser and two integrated tailpipes replacing the 458’s trademark central triple pipes. The aero elements are active and help make this Ferrari’s most aerodynamic road car yet.

A new Side Slip Control system (SSC) ups the acronym count, using the the F1-Trac traction control and E-Diff electronic differential to shuffle torque between the driven rear wheels to control slides more accurately. Also boosting balance and traction is a set of bespoke Michelin Pilot Sport Cup2 tyres. The brakes have also been upgraded, with some new calipers that have been developed using technology from the LaFerrari.

Ferrari claims some of the 458 Speciale’s technology will make it onto its future road cars, with SSC and that active aero seeming dead certs. Inside, the Speciale appears to gain a more focused interior, with carbon bucket seats likely to complement several bits of carbonfibre trim, including a prong on which the seven-speed twin-clutch paddleshift gearbox's controls lie.

Ferrari has yet to release the Speciale's price, top speed and production numbers. North of £200,000 and a good chunk over 200mph seem very good bets, though…