The 1990s 964 RS is now one of the most sought-after Porsches, but its even rarer Ferrari counterpart remains a relative unknown. Richard Meaden finds out if the mysterious 348 GTC can give the iconic 964 RS a run for its money 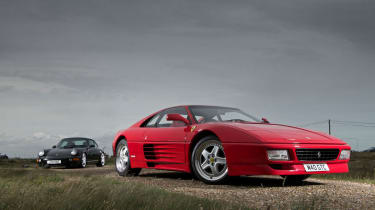 What was it about the early to mid ’90s that made everyone blind to cars like the Ferrari 348 GT Competizione and Porsche 964 Carrera RS? Both were the product of extensive and uncompromising improvement in order to make them suited for motorsport. Both were lighter, sharper, more aggressive and more exciting. They were also rare and expensive, yet for years they remained unloved and overlooked, the victims of stigma and blinkered reviews.

Fast forward to 2010 and the times they are a-changin’, at least as far as the Porsche is concerned. Nowadays its combative character is back in vogue, and enthusiasts appreciate its significance in the grand scheme of things Zuffenhausen. That’s also reflected in the 964 RS’s steadily increasing value.

By contrast the 348 Competizione has remained something of an enigma. So few of them were built that only a handful of people can genuinely claim to know what they are like to drive, yet the wider petrolhead populace is content to tar it with the same brush as the largely unloved vanilla 348. Question is, what’s the GTC really like, and how does it compare with its ’90s opponent?

Unsurprisingly, this is the first time I’ve ever driven a 348 GTC, and to be honest I’m not too sure what to expect. I know it’s a special car purely thanks to its rarity (just 50 were built, of which only 8 were right-hand drive), and there’s no question that, on paper at least, Ferrari’s first homologation special after the magnificent 288 GTO promises a great deal. But, as we all know, the regular 348 on which it is based isn’t the best starting point, being relatively heavy, underpowered and dynamically unresolved. If ever there was a car to stretch the transformative powers of motorsport homologation, this is it.

Funnily enough, I’m actually rather smitten by the 348 GTC’s riot of slats, scoops and blingy split-rim wheels. True, it looks dated in the presence of the 964 RS’s timeless, brutal simplicity, but there’s no question the Competizione makes a standard 348 look rather apologetic and turns heads more readily than the stealthy Porsche.

Much like the F40, the 348 GTC uses a Kevlar/carbonfibre composite to save weight. You can see it in the chunky weave of the sills and seats, and feel it in the weight of the doors. The front and rear bumpers are made of the stuff too, while the wider, 18in polished alloys are also lighter than the standard car’s 17in items. It all adds up to a huge 190kg saving over the standard 348 GTB, which, when combined with the later 320bhp version of the standard car’s 3.4-litre V8 engine, results in a 348 with a power-to-weight ratio on a par with its successor, the F355.

The springs and dampers are firmer than the regular 348’s, and the gear-linkage uses a rod rather than cables, so the shift action should feel more connected and precise. Performance claims are hard to come by (even Ferrari’s own website leaves blanks), but it’s safe to say the Competizione would trump the standard 348’s 0-62mph time of 5.4sec, though it’s unlikely its top speed is different to the standard 348’s claimed 175mph.

When you swing open the extravagantly straked door, your eyes fall on the broad Kevlar sill and the bright red fireproof material that wraps the heavily bolstered seats. Once pinched between the padded side supports, your feet fall on funky and heavily offset drilled aluminium pedals, while the simple non-airbag steering wheel bears the inscription ‘348 GT Competizione’ followed by the build number of the car. Special stuff for people like us.

The interior itself is airy, thanks mainly to the low scuttle typical of mid-engined cars. The screen is steeply raked, while the wraparound dash amplifies the sense of space and width. It feels great to grab the chrome, cue-ball-sized gearknob and slot the spindly gearlever through the once iconic but now sadly defunct open gate with a satisfying schlick-schlick.

The engine starts on the key – no fancy starter buttons or manettinos here – and settles to a busy idle, exhaling brassily through the four stubby tailpipes. It’s not shouty like a 430 Scud, but there’s an edge to the note and a keenness to the way the revs yelp with each exploratory prod of the firm throttle pedal that’s unmistakably Italian and exotic.

Pulling the lever to the left and back (yes, it’s a dog-leg ’box) and easing the weighty clutch pedal to the bite point, it’s immediately clear this Ferrari isn’t truculent or impatient in unfamiliar hands. Actually it’s really rather civilised, with no chuntering from the transmission or sharpness from the clutch. The unassisted steering feels heavy at rest, but soon lightens up beyond walking pace. The damping feels taut and the structure rigid, but there’s an encouraging pliancy that suggests the GTC won’t be as punishing and uncompromising as the notoriously hardcore 964 RS.

It takes revs to wake the 348’s motor, but once you do it flies, zinging from 5000rpm to the 7500rpm red line with typical Ferrari enthusiasm. It sounds good too, howling with 355-like musicality, and crackling nicely as the revs drop on a trailing throttle.

The Competizione steers accurately and with just the right balance between response and progression, so you can thread it along sinuous roads with confidence and precision. It feels grippy too, although it pays to remember that mid-engined cars weren’t always as benign as they are these days. More wheel-time would doubtless reveal greater depths of talent but, even so, it’s clear that the 348 GTC is a very special car. Perhaps the car the 348 should always have been.

This is far from the first time I’ve driven a 964 RS, for, as regular readers will know, J74 KAE has had my name on its V5 for just over four years. But it’s slightly odd to have to appraise it with a contemporary, and stranger still to have followed its fat rump down the road, or seen its road-skimming nose bobbing in my rear-view mirror with young Adam Shorrock, evo’s senior designer, behind the wheel.

At first glimpse of the Ferrari I’m ashamed to say I sensed my gaze being drawn away from the unadorned, pebble-smooth Porsche to the bright, brash wedge of ’90s stylistic cheese. But now I’ve looked back at the Porsche I know I’m falling in love all over again. It just looks so right, so mean and so squat and small. In fact it typifies everything I admire about Porsche’s hardest breed of 911.

Inside it’s pretty basic. There’s none of the Ferrari’s flair or flamboyance, just an array of dinner-plate dials, a line of organ-stop switches, an upright windscreen and a sturdy roll-cage to underline the car’s racing intent. The driving position isn’t quite as offset, but the floor-hinged pedals work your ankle joints against their will. Still, the overall feeling of being in a functional, high-speed office is very similar to that of the Ferrari.

The five-speed manual ’box follows a conventional H-pattern gate. Closer ratios maximise the 3.6-litre flat-six’s 260bhp (up 10bhp from the standard Carrera). A single-mass flywheel and no sound deadening mean the RS clatters and chunters on tickover unless you dip the clutch, but the sound of the air-cooled motor growling through a Cup bypass exhaust is one of the great automotive soundtracks.

At 1220kg there’s little between the RS and the GTC weight-wise (savings came from an aluminium bonnet, thinner glass, magnesium wheels, cheapo carpets and no underseal), and though the Porsche motor gives 60bhp to the Ferrari, both share the same 239lb ft peak torque figure, which means the RS feels just as responsive and accelerative as the GTC. More than a decade and a half since they were introduced, both remain fast cars.

The Porsche also has unassisted steering, but where the Ferrari’s lightens to near-assisted levels at speed, the 964 always requires some muscle. There’s more feel through the wheel, though, and you’re more aware of what the car is doing. Despite the engine being hung out back, it’s easier to lean on the front end on the way into a corner, and to trust in the available traction on the way out.

Okay, I’m now prepared to admit the ride is pretty awful. Bumps and potholes are most definitely the enemy, but in the context of the car as a whole I think it’s this brutal damping that confirms the 964 RS’s no-nonsense purpose in life. The GTC’s greater compliance and civility is impressive and unexpected, but would have suited the regular 348 just as well, if not better, than the ‘extreme’ version.

I drove to meet the GTC wondering if I might be tempted to trade the RS for the Competizione and a chunk of cash. If I had the sense and cold heart of a car trader (or Monkey Harris) I’d probably have done just that. That there’s still a much-loved black 911 parked in my garage is evidence of a Porsche victory, yet I know in years to come I’ll be boring people with tales of the day I could have snapped up one of the rarest and most underrated road-going Ferraris ever made for less than the price of a top-spec Audi TT.