The 360 was a big step on from the 355, culminating with the scintillating Stradale 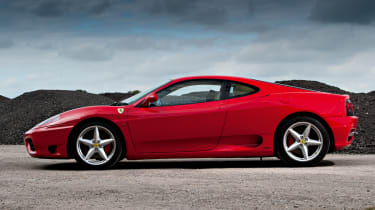 Tough act to follow, the F355. After all, it was such a pretty, finely-balanced thing. Could it be finessed? Probably, but Ferrari didn’t want to run the risk of trying and failing. So its 1999 successor, the 360, wasn’t as achingly lovely. It lacked something of the 355’s sweet, tactile nature. Instead, Ferrari started again and set off in a different direction: more power, more noise, more resolve and, ultimately, more thrills.

With 394bhp on tap from a 3.6-litre V8, the 360 Modena had 20bhp more than the F355 and moved the game on with its innovative engineering solutions, not least in its aerodynamics and use of aluminium structures. F1 paddle-shift was again optioned as an alternative to the six-speed, open-gate manual and, in 2000, the fabric-roofed Spider appeared.

Both cars offered a step-change in practicality for entry-level mid-engined Ferraris. Promo videos had Eddie Irvine casually lobbing a bag of golf clubs into one. The doors opened wider, the sills were narrower.

The range was expanded again in 2003 with the arrival of the 360 Challenge Stradale – effectively a road-legal version of the Ferrari 360 Challenge race car. And suddenly the 360 became a whole lot more exciting. It might have been, in essence, a 360 with a loud exhaust, stripped-out cabin and stickier tyres, but the modifications unleashed the beast within. With power up to 420bhp and the 0-60 time down to 4.1sec, the Stradale felt like a different sort of Ferrari.

The extra noise, bite, response, grip and braking power – those ceramic stoppers were immense – made an already addictive driving experience completely intoxicating. The manic scream and shove of the flat-plane crank V8 struck a crucial difference. Blinding chassis, too. Driving the Challenge Stradale flat-out was an adrenalin rush like little else.