Latest in the line of V8 mid-engined Ferraris, the 458 Italia will blow you away 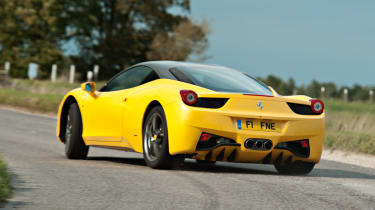 As an automotive sculpture, the 458 Italia recalled Miura levels of beauty. But it was the kinetics that knocked us sideways. Designed to replace the F430 and Scuderia, it was a completely new car in all respects. Even the engine was new, a 4499cc V8, with a flat-plane crank and direct injection. It delivered 562bhp at a seemingly insane 9000rpm.

Helping translate its wild 384bhp-per-ton power-to-weight ratio into 0-60 in 3.4sec was Ferrari’s sensationally swift seven-speed dual-clutch transmission. It was an F1 transfer showcase, too, with the latest generation E-Diff differential and F1-Trac skid control systems.

But even that gave scant notice of the way it would drive or how radical the new ergonomic regimes would seem from behind the wheel. The all-new dashboard design featured a trick TFT display alongside the dials to show how the different elements of the car were performing. Indicator and wiper stalks were absent, too, the functions moved to neat little buttons on the steering wheel.

No, the 458 wasn’t the normal updated V8 berlinetta. It did things that other – perhaps lesser – machines could not. The steering was very fast and light, throttle response especially sharp. The performance was simply startling. It hauled from 2500rpm in one great wall of noise, and those seven ratios were so closely stacked – and the gearshift so fast – that the impression was of one long, sustained rush of acceleration.

You conduct the car with your wrists, making small, neat inputs. You lean on the systems to transfer as much of that 562bhp to the surface as possible and you almost forget about the gearshift because it’s so damn efficient. You cover ground at an extraordinary rate, you grin at the arrogance of the engine and you admire – greatly admire – the technical omniscience of Ferrari’s achievement.