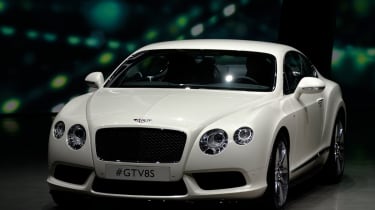 Bentley has launched its new high performance V8 S variant of the coupe and convertible Continental GT at the 2013 Frankfurt motor show.

The new model sees the GT and GTC V8 models relinquish an extra 21bhp and 15lb ft from the twin-turbo 4.0-litre engine – totaling 521bhp and 502lb ft of torque.

Chassis tweaks include a 10mm drop in ride height, retaining the multi-link setup. The air suspension has been given slightly increased spring rates at the front and rear, as well as a recalibrated version of the car’s Continuous Damping Control system.

With a less aggressive stability control allowing slightly more slip, firmer bushes at the front and a stiffer rear anti-roll bar, the whole package is said to add up to a sharper and more positive chassis handling GT. New options also include three new paint options, taken from the the Mulsanne, and new bespoke fitted luggage.

Easily identifiable externally, the S model comes with new 20-inch alloy wheels, re-profiled front bumper, rear diffuser and side skirts. Deliveries are said to start in early 2014, with prices and more details to be annoucnced closer to launch.