The new 2014 Mini gets adjustable dampers, weight-saving tech, new turbo engines and a rev-matching manual gearbox, and it's bigger too 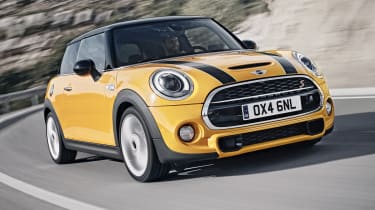 After months of teasing, the new for 2014 Mini has been revealed in full at the company’s Oxford plant. The third-generation BMW Mini, its subtle styling tweaks hide bigger changes underneath.

At launch, petrol choices will be a 1.5-litre three-cylinder with 134bhp and 170lb ft maximums, badged Mini Cooper, and a 2-litre four-cylinder – the biggest petrol engine ever seen in a production Mini – with 189bhp and 221lb ft and badged Cooper S. A lower powered One and higher powered John Cooper Works versions will follow further down the line. Both engines rev to 6500rpm. Expect the new Cooper S to offer improved performance, with a 0-60 time of around 6.5sec and a top speed of 150mph. Fuel economy should also improve, despite its engine being bigger than the current Cooper S’s 1.6 turbo. A claimed figure north of 50mpg is likely.

The new Mini Cooper and Cooper S in action on video:

The suspension has had an overhaul, too. It continues with a single-link front and multi-link rear setup, but with new lighter aluminium and steel components and wider track widths, as well as – for the first time in a Mini – Variable Damper Control. An electronic setup, it will possess sport and comfort settings activated via a dashboard button. The former is described as ‘emphatically sporty’; let’s up it bucks the trend of some performance Minis and isn’t emphatically harsh, too.

While the new Mini has grown in size (its 3821mm length is up nearly 100mm, with 28mm of this in the wheelbase), it will be lighter too, though the car’s most structural areas will gain new high-strength steel construction. Pedestrian safety will improve with a new active bonnet, which rises via pyrotechnics when a collision is detected in an attempt to lessen the injuries suffered.

Looks are, of course, purely down to opinion, but it’s hard to avoid concluding that the small changes that have been made to the Mini’s styling aren’t entirely flattering, with its longer front overhang obvious and its lights and general features a little more bulbous than before.

Other technologies previewed by BMW include an advanced braking system, which aims to boost the car’s efficiency while offering greater endurance thanks to new brake coatings, caliper protection and cooling. A new electric power steering system is speed variable, and will offer a fight against torque-steer (a bugbear of Mini’s fastest models) as well as a new park assist system.

Inside, the interior has had a greater overhaul than the exterior. There is a new, more stylised starter button, the sport button is now a toggle wrapped around the bottom of the gear lever and the infotainment controls look to have a touch pad. Perhaps most crucially, ergonomic niggles have been ironed out, with electric window switches moved to the doors and a more traditional, less comically sized speedometer sitting with the steering wheel rather than dominating the dashboard.

As well as new versions of the convertible, Countryman, Paceman and Clubman, a more conventional five-door hatchback is expected further down the line.