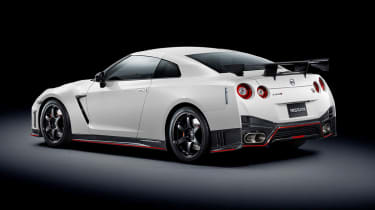 This week sees the opening of the 2013 Tokyo motor show. It takes place at the same time as the Los Angeles motor show on the other side of the world, so needs to compete for the attention of the press and performance car fans alike.

Luckily, this year’s show has some real crackers to ensure our interested is piqued. Click the links below to read more details and see picture galleries of the cars involved.

Nissan GT-R NismoAfter months of teasing, speculation and spy shots, the Nismo GT-R is finally here. With 591bhp it runs the Ferrari 458 Speciale close in the power stakes, but its 7m08s Nurburgring lap time is on a whole other level.

Nissan GT-R 2014 Don’t forget the regular GT-R in all of this. £50,000 cheaper but just 50bhp down, it’s still a formidable force in the sub-supercar sector and it receives its annual update just as the ballsier Nismo arrives.

Honda Civic Type-RAfter several years away, the Type-R badge returns to the hot hatch sector via a revolutionary new Civic. It’s still powered by a VTEC engine, but this one has a turbocharger with promise of around 280bhp.

New Mini Cooper and Cooper SIt’s first unveil was in Britain, but the Mini is heading to both Tokyo and LA for maximum coverage. The third generation under BMW ownership, it’s bigger, more powerful and with a smarter interior, as well as a host of new tech.

Porsche Panamera Turbo SThe pokiest Panamera yet, the Turbo S has as much power as a Ferrari 458 Italia or Lamborghini Gallardo.

Nissan Bladeglider conceptRemember the Deltawing racing car? Nissan clearly does, as its shape is set to make it to production via the electric-powered Bladeglider.

Mitsubishi hybrid conceptsThe strongest hint at a hybrid-powered Mitsubishi Lancer Evo yet comes via this trio of concept cars.

Mercedes S65 AMG and SLS AMG Final EditionAlso on display at LA, this pair of superfast Mercs simultaneously appears at Tokyo too.

Subaru estate conceptsThe Sport Cross and Levorg may have silly names, but thoughts of a BRZ shooting brake and the return of the fast Legacy are far more enticing.